French President Emmanuel Macron has accused UK politicians of “bluffing” over a “no-deal” Brexit option. Much “still needs to be done” before the next round of negotiations can begin, he added.

“We haven’t even got halfway there yet,” Macron told reporters in Brussels.

“Theresa May’s problem is that those who wanted Brexit never told the British people what the cost would be.”

He insisted that even if some in Britain say it would be possible to walk away from the EU without any deal, May has never mentioned the possibility. He called the speculation about that option “bluffing.”

His comments come as the UK prime minister called on EU leaders to break the deadlock and give her something she could “defend” to the British public.

On Friday morning, European Council President Donald Tusk said EU leaders have given the “green light” for internal preparations to begin on post-Brexit trade talks. He said, however, there has not been sufficient progress on the issues of citizens’ rights, Northern Ireland or the divorce bill to start formal talks.

While there have been efforts to show progress in the strained Brexit negotiations in Brussels, May had hoped by October to kick-start discussions with the other 27 EU leaders on a future trade deal, known as “phase two” of the negotiations.

Tusk added that reports of a deadlock between the EU and UK have been exaggerated, and insisted there has been progress. He said the EU hoped to move to the second phase of talks in December.

May has signaled Britain could pay billions of pounds more in a Brexit divorce bill to secure a start to trade talks before Christmas.

At a news conference on Friday, the UK leader was asked three times if she was offering more money to the EU and gave no denial.
“We will honor the commitments we have made during our membership,” she said. 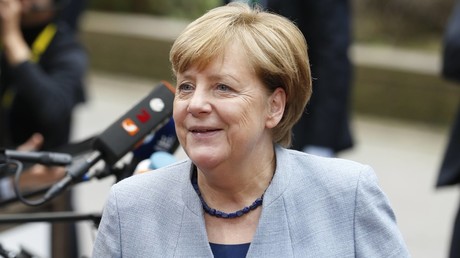 “Now there has to be more detailed work on those commitments… and we will continue going through them line by line, and the British taxpayers wouldn’t expect its government to do anything else.”

“I know we have a long way to go,” May told reporters, adding “we should recognize what has been achieved to date.” She also insisted the UK “is in touching distance” of a Brexit deal.

May’s conciliatory tone this week has been welcomed by some leaders, including German Chancellor Angela Merkel, although others were less impressed. On Friday morning, Lithuanian President Dalia Grybauskaite and Austrian Chancellor Christian Kern both called for more tangible proposals from the UK, instead of “rhetoric.”

Merkel said suggestions in Britain that talks should be broken off were “absurd.”

“I have absolutely no doubts that if we are all focused… that we can get a good result. From my side there are no indications that we won’t succeed,” she said.