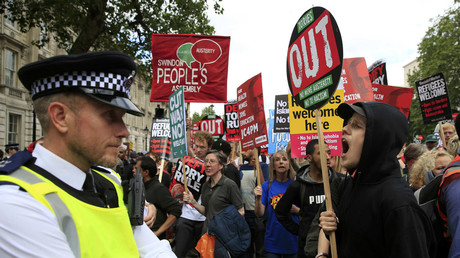 Several thousand protesters demonstrated in London on Saturday against austerity, racism and the new Tory government. The opposition rally was the biggest major protest since the June 23 Brexit referendum.

READ MORE: Family finances hit by Brexit vote… and it’s going to get much worse

Protesters made their way down Piccadilly Circus, Marble Arch and Hyde Park.

Crowds of people were demanding that new Prime Minister Theresa May resign.

Organizers said it was an “emergency demonstration” against austerity, racism and the Conservative Party. It was first arranged following the Brexit vote.

The march, titled: “No More Austerity, No To Racism, Tories Must Go” was organized by various protest groups including the People’s Assembly Against Austerity.

“The message is very clear, that people are rejecting the Tories’ austerity policies. Communities are suffering as a result of them and the one way to end that is to get rid of the Tories,” one of the organizers, Steve Sweeney, told the Evening Standard.

The protest was joined by Black Lives Matter campaigners.

Meanwhile, a small anti-migrant demonstration of some 70 people, organized by the far-right English Defence League (EDL), was also held in central London.

Members of the far-right group wore English flags and masks, chanted “No surrender” referring to Islamist terrorist groups and at a rally in Hyde Park speakers railed against Islam and immigration.

The anti-austerity demonstration comes three weeks after the UK voted in a referendum and chose to leave the EU. Following former Prime Minister David Cameron’s resignation, Theresa May took over the post on Wednesday.

May immediately began with a cull of Cameron allies in her new Cabinet, although she gave three key roles for known Eurosceptics.

One of her most controversial choices May was appointing former London Mayor and Leave campaigner Boris Johnson as foreign secretary.