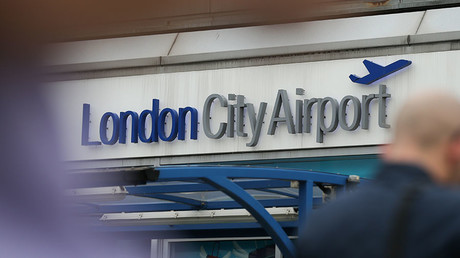 London City Airport has been closed after an unexploded World War II bomb was found nearby in the River Thames. Up to 16,000 passengers are expected to be affected.

The bomb was found at George V Dock at around 5am GMT on Sunday. The airport was closed at 10pm GMT and will remain closed until Tuesday at least.

The device was discovered during scheduled work at the airport, according to the Metropolitan Police, which is working with the Royal Navy to remove the device.

All flights have been canceled, with up to 16,000 passengers expected to be affected. Passengers are being advised not to travel to the airport, and to contact their airlines.

Following the discovery of a World War Two ordnance in King George V Dock as part of planned development works, a 214m exclusion zone has been implemented as a precaution by the Met Police. As a result, London City Airport is currently closed. (1/3)

Motorists have also been asked to avoid the surrounding area, as a number of roads have been cordoned off. Docklands Light Railway (DLR) services between the airport and Woolwich Arsenal have been suspended.

The CEO of the airport, Robert Sinclair, has apologized for the situation. “I recognize this is causing inconvenience for our passengers, and in particular some of our local residents. The airport is cooperating fully with the Met Police and Royal Navy and working hard to safely remove the device and resolve the situation as quickly as possible,” he said.