Congress is trying to camouflage US responsibility for civilian deaths in Yemen – it’s an attempt to put lipstick on the pig of the Saudi-led criminal war against Yemen, Brian Becker from Answer Coalition told RT.

The US Senate revealed this year’s defense policy bill which puts conditions on US arms sales to Saudi Arabia for its operations in Yemen. It wants assurances from Saudi Arabia that it will do everything to end the Yemeni civil war and eliminate civilian deaths.

The Saudi-led coalition started its bombing campaign against Yemen in 2015, targeting Houthi rebels. The coalition has conducted thousands of airstrikes and some have hit civilian areas. However, it always denied doing that intentionally. Saudi Arabia says that Houthi rebels pose a threat to its borders.

Becker from Answer Coalition believes that this measure won’t end the bloodshed and the war in Yemen.

“I would say in many ways this measure is something of a sham,” he told RT. “Here you have the US Senate requiring the secretary of defense and the secretary of state to certify in Congress that, in fact, the money being used by the Pentagon for Saudi Arabia isn’t done in such a way as to commit war crimes or crimes against humanity. But in fact the entire war is premised on illegal conduct. It’s an illegal war from the beginning.”

The provision, included in the Senate-passed NDAA, says that if the US cannot certify that the Saudis are not engaged in criminal conduct, the US will stop refueling Saudi aircraft, said Becker.

Becker explained that the US itself “is not simply giving money to the Saudis to carry out an illegal criminal war in Yemen,” but is coordinating and refueling Saudi aircraft and helping to select the targets for Saudi bombs. According to Becker, this resolution is toothless and an embarrassment for parts of the American political establishment.

Becker called the situation in Yemen one of the gravest humanitarian catastrophes in modern times: “And that is not a hyperbola, that is not an exaggeration.” He recalled that the US government under Barack Obama offered more than $110 billion in weapons to the Saudi monarchy. Indeed, Donald Trump’s first visit abroad was to the Saudi royal family where he pledged another $110 billion of US arms for the Saudi government.

“Now as the whole world is pointing its finger and saying to the Saudis, ‘You are engaged in criminal conduct, you are engaged in crimes against humanity, this must end.’ Congress is trying to camouflage, shield or absolve the US for the responsibility of this government, the US government in this terrible criminal war. This resolution is nothing other than a fig leaf or a mask to shield American complicity,” claimed Becker. 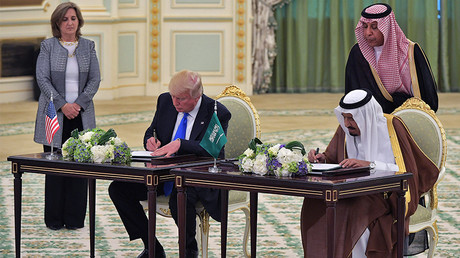 He suggested that all US arms to Saudi Arabia and all financing of the Saudi war against the people of Yemen should be ended.

Additionally, Becker argued that the tactic the US is using is simply an old trick. “If you go back and look through National Defense Authorization Acts, there are all kinds of instances whereby Congress requires the executive branch to certify that the money being authorized by Congress for the executive branch, and in particular for the Pentagon, or for intelligence agencies should not be used for international criminal events, such as the war in Yemen.”

This exercise is nothing other than an attempt by Congress “to put lipstick on the pig,” Becker concluded.