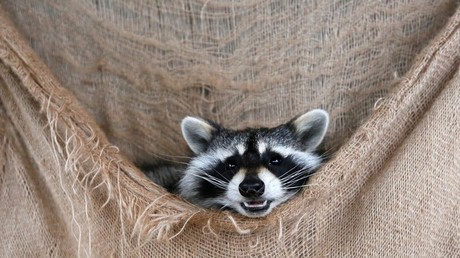 Texas cops had to chase down an unusual trespasser in the form of a four-legged, lightning-quick raccoon that invaded Bedford Police Station on Monday.

Footage of the bizarre police hunt was captured via CCTV inside the Texas station, showing how the furry trespasser led a pest control officer and cops on a merry dance.

“Anyone need a good laugh?” Bedford Police Station wrote on Facebook after posting the hilarious video. “Someone put our Animal Control Officer and Detention Officers to work early this morning.”

In the one-minute clip, officers from Bedford Police Department can be seen searching behind a vending machine for the plucky raccoon. The dark-eyed animal then leaps from under the machine before darting around the reception area at high speed.

Just as an officer appears to have caught the furry critter in a large net, it escapes again by scaling a nearby shelf. According to CBS Local, the evasive raccoon’s run-around was eventually put to a stop and he was captured by police.