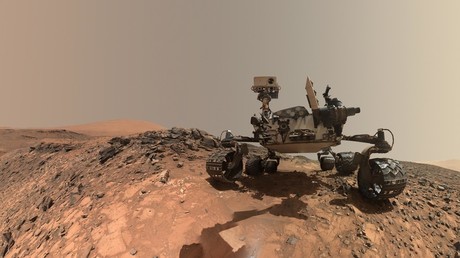 NASA’s Curiosity rover has uncovered organic material in an ancient lakebed and confirmed a seasonal cycle of methane – offering the strongest evidence yet of potential life, past or even present, on the Red Planet.

The discoveries were revealed by NASA researchers in a highly-anticipated announcement on Thursday, and details have been published in the journal Science.

The revelations build on a similar announcement made by NASA in 2014, where scientists confirmed that they had discovered chlorinated molecules on the planet for the first time. This latest evidence, however, is far more compelling.

The Curiosity rover discovered organic matter preserved in 3-billion-year-old mudstones at the Gale Crater. The material was located in the first layers of rock, some four miles away from where the chlorinated molecules had been found.

“All life as we know it is based on organic molecules,” Jen Eigenbrode, a research scientist at Goddard, said during the press announcement, suggesting that, while this evidence doesn’t definitely prove there is life on Mars, the signs are there to investigate further.

Questions remain, however, as to how the organic material was formed. “While we don’t know the source of the material, the amazing consistency of the results makes me think we have a slam-dunk signal for organics on Mars,” Eigenbrode said. “It is not telling us that life was there, but it is saying that everything organisms really needed to live in that kind of environment, all of that was there.”

Another team of scientists, led by Christopher Webster from the California Institute of Technology, presented evidence that methane concentrations detected on Mars follow strong seasonal variations. The seasonal variation provides an important clue for determining the origin of martian methane.

Webster explained that this is an exciting discovery because 99 percent of methane produced on earth has a biological origin, giving examples of rice paddies and termites. He also pointed out that as methane only lasts for 300 years in the atmosphere and any detections mean that it was created or released relatively recently.

Overall, the latest discoveries bode well for future endeavours. “The chances of being able to find signs of ancient life with future missions, if life ever was present, just went up,” said Curiosity’s project scientist, Ashwin Vasavada.