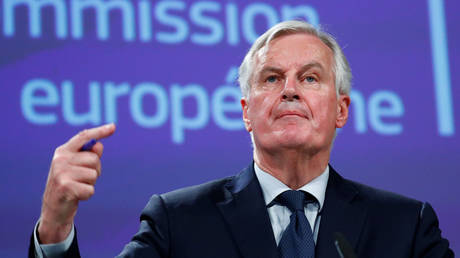 EU chief negotiator Michel Barnier has insisted that the duration of delaying Brexit past the current deadline day, April 12, hinges on what “purpose” UK PM Theresa May has for extending the process.

Speaking at a media conference in Luxembourg, Barnier claimed Brussels was willing to grant May more time to achieve UK parliamentary consensus on a Brexit deal, however a clear plan needed to be presented to the EU’s 27 member states.

The duration of an extension – it has got to be in line with the purpose of any such extension.

On the eve of an EU summit on the Brexit crisis of national leaders, the bloc’s chief negotiator made it clear that the Political Declaration, which sets out the future UK-EU relationship, could be improved and amended “within a few hours or days” – if cross-party talks in London around a new plan bear fruit.


Barnier poured cold water on any suggestions the Withdrawal Agreement could be reopened, insisting that it was “not up for negotiation again.”

It comes as PM May attempts to acquire concessions from two of the EU’s top power-players, German Chancellor Angela Merkel and French President Emmanuel Macron. May is expected to ask for an Article 50 extension to June 30. She will then head to an emergency EU meeting in Brussels on Wednesday when all member states will vote on an extension.