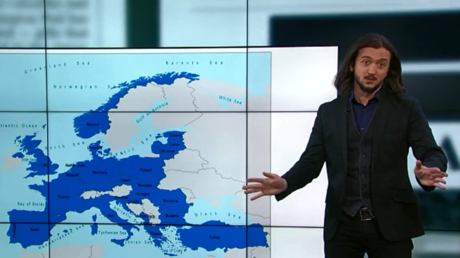 NATO will celebrate its 70th birthday in April, but the vast majority of US lawmakers have already sent it a giant ‘love letter’ and have promised gifts. Lee Camp tears into the recently-passed NATO Support Act.

In the latest episode of Redacted Tonight, Camp took a shot at the US congressmen who overwhelmingly voted to pass the NATO Support Act. The military bloc marks its 70th anniversary this year, and both Democratic and Republican lawmakers have pledged their continued support for the alliance and “robust” funding.

All the praise and birthday wishes aside, NATO boils down to being “an aggressive arm” of a “belligerent and bloated” Pentagon, Camp says, noting that the organization has carried out bombing campaigns all over the world.

“Organized mass murder is not ‘better’ or ‘nicer’ when it has a NATO banner next to it. That’s just a Christmas wreath on a serial murderer’s house. It’s just there to make you think everything is fine but it’s not.”

The organization is often praised for fostering “better cooperation with the world.” Or, in Lee’s words, it’s “like saying that the only way you can befriend your neighbors is to join forces in murdering other people.”

Later in the show, Lee’s team explores NewsGuard, a browser app designed to help sort out ‘fake news’. It assigns each media a color-coded ‘nutrition label’, with red for fake and yellow for biased. The catch? NewsGuard’s Advisory Board is packed with (you guessed it) former US officials, ranging from White House staffers all the way to the ex-head of the Department of Homeland Security.