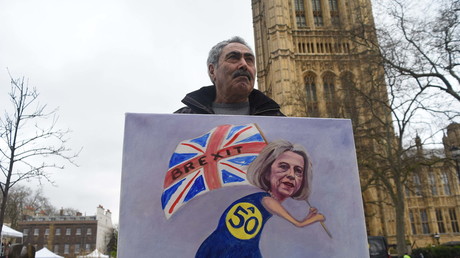 With just a year to go before the UK effectively withdraws from the EU, the public has taken to social media to call for a ‘#finalsay’ on the Brexit deal, having branded the Vote Leave campaign the “biggest dupe.”

Remainers are using the ‘#finalsay’ hashtag to vent their frustration at the UK’s “catastrophic” decision to quit the bloc, and to call on the government to give the public a vote on any final deal. The idea of not having a say on the Brexit deal is “intellectually bankrupt,” according to one social-media user.

Tweeters have taken to the social media platform to argue that it is not merely Remainers who yearn for another run at the Brexit vote, but Leavers too.

I’ve seen Leave-voting inlaws break down in tears of regret, rural Leave voters devastated over decline in their areas, elderly Leave voters shocked&confused at the Brexit plans so far. Always the resounding message “we didn’t want this”. When do they get a #FinalSay ?

The #finalsay Twitter trend comes just after it emerged that Vote Leave may have acted unlawfully during the EU referendum. Cambridge Analytica’s former director of research turned-whistleblower Christopher Wylie claimed the campaign had exceeded the legal spending limits imposed by the Electoral Commission by collaborating with pro-Brexit BeLeave, among others. Now, following the allegations of “cheating” by Vote Leave, Remainers are stepping up their campaign to reverse the decision.

The very idea that we can’t vote on the final deal is undemocratic, unsustainable and intellectually bankrupt.@IsabelOakeshott & @JuliaHB1 will be pleased.#FBPE

It comes as a major academic report found that Britain would vote to stay in the EU if a new referendum were held within the next 10 years. The report, funded by the Economic and Social Research Council, found trends representing a shift in attitudes, including an increased acceptance of immigration, that would, they posit, swing the vote in favor of Remain.

21 months after the EU ref, nobody, from the very Prime Minister down, has a clue what Brexit meant then, what it means now or what it means for the UK in the future. It’s turned out to be the biggest Tory dupe we’ve ever seen from a long, enduring list of Tory dupes. #FinalSay

But there were also those opposing calls for a final say, as they argued that Britain has already had its chance to choose in the 2016 EU referendum.