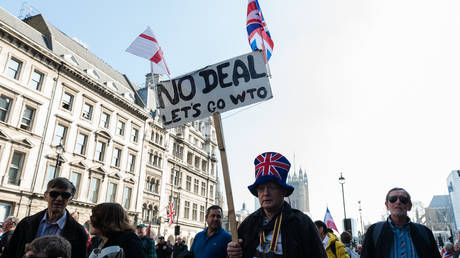 PM Theresa May’s cabinet secretary has issued a stark warning to Tory ministers pushing for a no-deal Brexit, claiming it could lead to a recession, spiralling food prices and threaten the safety of the public.

The leaked 14-page letter, penned by Sir Mark Sedwill, who is the head of the civil service, alerts British cabinet ministers to the dangers of the UK crashing out of the EU without a deal on April 12.


Sedwill claims there will be wider consequences for the British economy, security and constitution. He highlights the possibility of direct rule in Northern Ireland which could risk peace, and an economic recession more damaging than the global crash of 2008.

The EU’s chief negotiator, Michel Barnier, concurred with top civil servant’s assessment on the threat to UK security of a no-deal scenario. Barnier told an event in Brussels on Tuesday that there will be consequences of a no-deal on the level of UK-EU security partnership.

There will be a break in the level of talks, less mutual commitment, risks to intelligence pooling… No-deal for some time poses the threat of there being no organised framework.

It comes after British MPs rejected four alternative options to May’s Brexit plan on Monday, prolonging the political deadlock and increasing the likelihood of no deal.

Such a scenario can only be avoided unless a Withdrawal Agreement is agreed or the UK government requests a long extension to cater for a major political event, such as a second referendum or a general election.