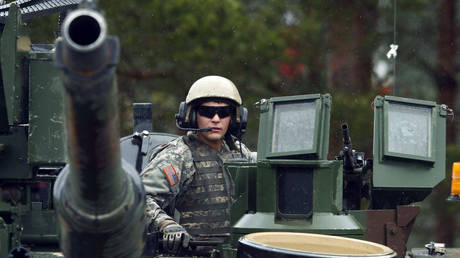 US troops at a German barracks breathed a collective sigh of relief this week on learning they could have sex again without fear of court-martial. An involuntary celibacy order for the battalion and its barracks has been repealed.

Perhaps operating under the misguided assumption that a clean mind is the best route to a clean base, commanders of the 2nd Battalion, 8th Cavalry Regiment, 1st Cavalry Division, 1st Armored Brigade Combat Team at Grafenwoehr Training Barracks had issued the unusual order nine days before, with a qualifier that the troops were to “focus” on “agricultural cleaning” and preparing for their return to Fort Hood, Texas.

Sex, presumably, would be too much of a distraction from their homecoming. And, lest anyone get confused, the memo was quick to specify that there would be no “rubbing, humping, grinding,” or even kissing to take the edge off. Cuddling was a definite no-no.

The memo, which was leaked on the aptly-named USArmyWTF, patiently checked off combinations of orifices, as if satisfying some perverse multiple-choice exam – then covered for whatever the writer had forgotten to include by adding a ban on “acts that are done with the intent to sexually gratify any person in the Grafenwoehr Training Area.” Presumably, the only way the troops could get off was by accident. Or by actually getting off the base.

The memo was no joke, either – violations, it said, were to be punished under the Uniform Code of Military Justice.


So, how did command maintain order after rescinding the memo? Did they pass out cat o’nine tails? Enforce mandatory cold water showers every three hours? Facebook wants to know.

Conard explained, “Soldiers were briefed on the importance of respecting others and maintaining good order and discipline.”