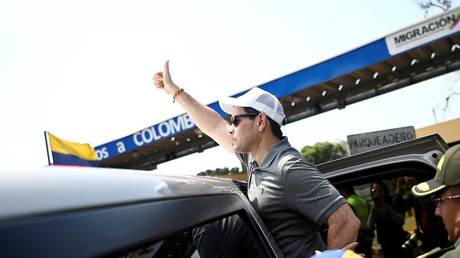 Senator Marco Rubio, the most outspoken cheerleader of US regime change in Venezuela, lashed out at several major outlets for not using his preferred terminology, going so far as to accuse CNN of ‘Russian collusion.’

“In order to undermine the constitutional basis for [Juan Guaido’s] interim Presidency [sic], Putin’s Russia repeatedly describes him as the ‘self-proclaimed’ president of Venezuela. And so does CNN,” Rubio (R-Florida) tweeted on Wednesday, adding, “Russian collusion?”

It was the latest in a string of tweets by the senator whom President Donald Trump is, for some unknown reason, allowing to drive US foreign policy on Latin America. On Tuesday, Rubio targeted the Washington Post and the Wall Street Journal for their coverage of Guaido, this time objecting to their use of the term “opposition leader.”

Rubio’s badgering of the media came shortly after State Department spokesman Robert Palladino tried to do the same thing with diplomatic correspondents in Foggy Bottom.

Referring to Guaido as anything other than “interim president” was feeding “the narrative of a dictator who has usurped the position of the presidency and led Venezuela into the humanitarian, political, and economic crisis that exists today,” Palladino argued.


Guaido, an opposition politician polling in single digits, declared himself “interim president” on January 23, and was quickly recognized by the US and some 50-odd allied countries, but not by the UN or the remaining three quarters of the planet. Even assuming that his declaration was legitimate, that “interim” mandate was only supposed to last 30 days, and is therefore long expired.

Rubio has been one of Guaido’s most vocal supporters, even traveling to Colombia to support the self-proclaimed president’s “human avalanche” that was supposed to open the border to US “humanitarian aid” on February 23. Nothing of the sort happened, however, and Guaido returned to Venezuela on Monday. He did not get arrested for violating the Maduro government’s travel ban, either.