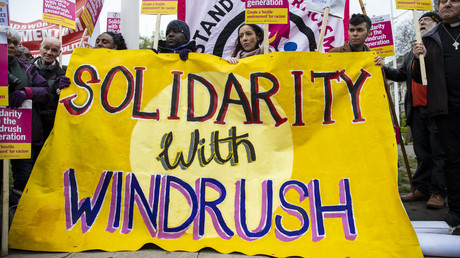 MPs have voted down Labour’s attempt to force the UK government to disclose secret papers on the Windrush scandal. Labour’s Diane Abbott accused Theresa May of ordering her MPs to “vote to cover up the truth of her involvement.”

MPs rejected Labour’s motion, which was led by Shadow Home Secretary and Windrush campaigner Abbott, by 316 votes to 221, giving the government a majority of 94.

Earlier in the day, it was reported that the government had ordered a three-line whip, compelling Conservative MPs to vote against Labour’s Windrush motion, or face the prospect of disciplinary action.

The instruction handed down to Tory MPs drew widespread criticism on social media, where some questioned whether the government had something to hide by refusing to be transparent over the scandal.

What we can impute with close to certainty from 3-Line Whip on Windrush: documents exist that could destroy May and end this administration

The Government are to 3 line whip Tory MPs to vote down Labour’s motion requesting #Windrush documentation.

This is disgraceful. Yet again Theresa May is more concerned with covering up her role as the architect of the Windrush scandal than providing any form of transparency.

Labour had hoped to use a “motion to return” to force the government to release the Windrush documents to MPs on the Home Affairs Committee, a technique used earlier this year to compel ministers to release 58 Brexit economic assessments.

Abbott had implored Conservative MPs to vote for the motion as it would enable them “to start to right the wrongs they have done to the Windrush generation.”

May had tried to allay fears at PMQs that her government was not taking Windrush seriously enough by affirming that the full review into the scandal, announced earlier in the day, would have “full access to all relevant information in the Home Office.”

Furthermore, she insisted it will have “independent oversight” and will report to Parliament before summer recess at the end of July, reports The Independent.

On Monday, @sajidjavid vowed to leave “no stone unturned” in pursuit of the truth about Windrush.
On Wednesday, he voted to keep all details of how it happened secret.
Dizzying hypocrisy has become a prerequisite for membership of Theresa May’s Government.

It comes after Amber Rudd was forced to resign from her position as home secretary due to her involvement in the Windrush scandal, even though some saw her as the ‘human shield’ to Theresa May’s fundamental failings on the issue.