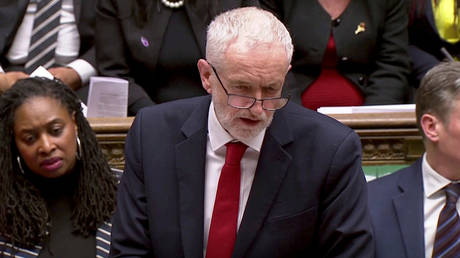 Ahead of Wednesday’s crucial vote, the Labour Party has tabled plans for a “softer Brexit” which it claims would secure many of the rights and privileges granted to EU member states while also honoring the 2016 referendum.

“The government’s approach to the Brexit negotiations has been an abject failure and this house must now come together to find a way forward,” Labour leader Jeremy Corbyn said.

A total of 16 Brexit plans, including Labour’s, are due to be debated in the British Parliament on Wednesday following Monday’s vote to wrest control of the Brexit process away from embattled Prime Minister Theresa May. Parliament backed the amendment, by 329 votes to 302, with a view to breaking the deadlock on Brexit. May offered to resign in exchange for Brexiteer support for her third proposal, but that also failed.

Also on rt.com
April to be the end of May? Speculation grows British PM on brink of quitting


The Labour Party says its plan would push for a “softer Brexit” while honoring the results of the 2016 referendum but still leaving room for negotiation with the EU. The proposed plan calls for harmony on employment rights and environmental protections with close alignment to the EU’s single market.

This would include a comprehensive customs union with the EU with the UK having a say on future trade deals.

It also seeks continued participation with EU programs related to education, science and culture in addition to the sharing of resources regarding security and law enforcement, including access to the European arrest warrant.

The plan, put forward by Labour leader Jeremy Corbyn, is likely to be defeated in debate, as Brexiteers would find many of its conditions unpalatable.

Several Labour MPs, including Peter Kyle, Phil Wilson and former former foreign secretary Dame Margaret Beckett, also tabled a proposal for a confirmatory public vote, with support from MPs across the house which would require a public vote to confirm any Brexit deal before it could be ratified.