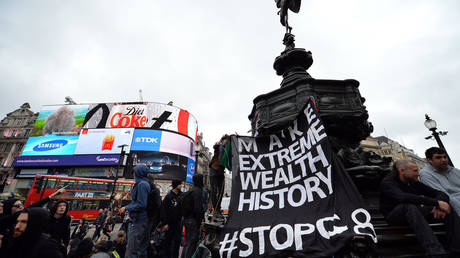 A Labour MP has come under fire on social media after claiming “hard left” MPs can’t help but be anti-Semitic, because they’re “against capitalists” and see Jewish people as the controllers of capital.

Siobhain McDonagh, Labour MP for Mitcham and Morden, claimed during an interview with BBC Radio 4’s Today programme, that there is a link between anti-Semitism and the anti-capitalist beliefs of some members and supporters of her party.

It’s very much part of their politics, of hard left politics, to be against capitalists and to see Jewish people as the financiers of capital. Ergo you are anti-Jewish people.

Journalist and prominent Labour activist Michael Segalov, who is Jewish, called on McDonagh to apologise for being incredibly disrespectful to the Jewish community, branding her comments “stupid and wrong.”

interrupting my holiday to say Labour MP Siobhain Mcdonagh saying to be anti-capitalist is to be anti-semitic on Radio4 this am is stupid and wrong and damaging and absolutely not true and is incredibly disrespectful to the Jewish community and she should apologise.

Writer David Rosenberg accused McDonagh of stereotyping Jews as capitalists. A point also picked up on by a Labour member who argued that in a roundabout way she’s saying “all Jews love money.”

Right wing Labour MP Siobhan McDonagh says “hard-left” anti-capitalist politics are behind antisemitism. She agreed with R4’s Humphreys “to be anti-capitalist you have to be antisemitic”. We can see now who stereotypes Jews as capitalists! Disgraceful.

Labour has a real problem with anti-Semitism. Siobhain McDonagh, a Catholic MP said this morning on #r4today in a round about way said that all Jews love money. As a Labour member I’d like to see her investigated @JennieGenSec

Labour’s Siobhain McDonagh just said “to be anti-capitalist you have to be anti-Semitic”.

Can someone please give Siobhain McDonagh a drug test. #r4today

McDonagh had been invited by the BBC to give her views on the current anti-Semitism “crisis” which has enveloped the Labour Party. She claimed general secretary Jennie Formby had behaved in the “most rude way” for “slapping down” deputy leader Tom Watson after he requested Labour MPs forward any complaints about anti-Semitism to him.

Also on rt.com
‘To portray him as a victim goes against their narrative’: UK journo slams media over Corbyn attack