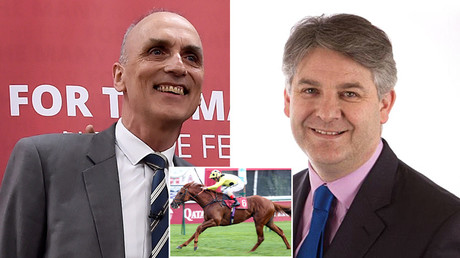 A Labour MP offered to whip a Tory MP on Monday night during a Westminster hall debate in parliament on racehorse welfare, to prove that he could hurt him with a horse racing whip – telling him “Let me hit you with it.”

Williamson then, strikingly, asked Davies if he could whip him to see how he liked it, saying: “Let me hit you with it. I think you’ll find I would be able to hurt you.” Davies insisted that wouldn’t be possible, prompting the Corbynite Labour MP to take to social media and ask for his followers’ opinions on the matter.

I think people would pay good money to see this!
Tory MP @PhilipDaviesUK claimed in a debate that race whips don’t hurt. He invited MPs to whip themselves to prove his point. I suggested if I whipped him with one I’d probably make it hurt. He said I couldn’t. What do you think? https://t.co/5XoDwNHp3T

Fellow Labour MP Luke Pollard who attended the debate, suggested that his colleague “might have to wait behind the Government Whips Office,” before he gets his turn on Davies. The revelation drew widespread amusement from those on Twitter with some asking if they could have a go themselves and others saying they’d pay to see it happen.

Good money to see it indeed! How much would it cost to have a go myself?! 😉

There’s only one way to find out! Do it for charity? I pledge £1 per stroke or £5 if I can do it myself.

He’s a Tory MP Chris. He just wants to get whipped without having to pay for it (for a change:)

Davies said that despite his disagreements with the BHA, he felt they were, in the main, doing a good job on welfare and insisted they were the right body to continue that work.

100,000 signatures gained from an e‑petition, set up by animal rights group, Animal Aid, initiated the debate on equine welfare. Animal Aid claim that the number of horse fatalities amounted to “a damning indictment” of the BHA, accusing racing’s ruling body of failing to handle the problem of whip abuse.