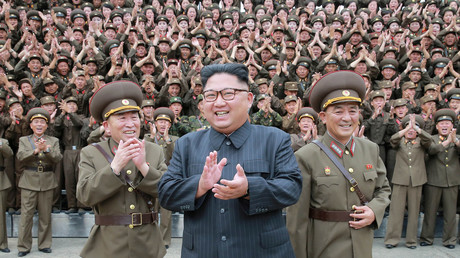 Washington will guarantee the “safety” of Kim Jong-un if he pursues denuclearization, US President Donald Trump said, promising it would make the North Korean leader “happy” and his country “rich.”

Striking a deal on denuclearization during the expected June 12 Trump-Kim summit would be very beneficial for Pyongyang, and would pave the way to “make North Korea great,” President Trump said on Tuesday while meeting his South Korean counterpart, Moon Jae-in, at the White House.

“He will be safe, he will be happy, his country will be rich,” Trump said. “Kim will be extremely happy if it works out.”

Trump said that the leaders of South Korea, China, and Japan told him they were ready to invest “very, very large sums of money” into North Korea’s economy if the deal works out. North Korea will then be able to reach the development levels of the South, which has received “trillions of dollars” from the US over the years.

READ MORE: Summit with North Korea in June may be delayed – Trump

If the June 12 summit does not work out, Kim Jong-un will not be able to be “happy” actually, Trump warned. The US president noted a “change of attitude” on the part of the North Koreans following the latest meeting between Kim Jong-un and Chinese President Xi Jinping. He called Xi a “world class poker player” who he believes to be a “great friend” of his, and would like to think is committed to peace on the Korean Peninsula.

“If it doesn’t happen, maybe it will happen later,” Trump said. “It may not work out for June 12.”