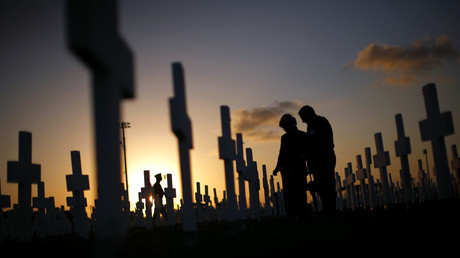 People say you shouldn’t air your dirty laundry in public. That’s seemingly not the view of Jay and Gina Dehmlow, a disgruntled duo who posted a savage obituary of their late mother Kathleen in their local newspaper.

The obituary, published in Minnesota’s Redwood Falls Gazette, has been shared more than 36,000 times online and tells the life story of 80-year-old Kathleen Dehmlow. From her birth in 1938 in Wabasso, Minnesota, the five-paragraph piece remembers her marriage in 1957; the birth her two children, Gina and Jay; her 1962 pregnancy by her husband’s brother Lyle; and her decision to “abandon her children” and move to California.

“She passed away on May 31, 2018, in Springfield and will now face judgement. She will not be missed by Gina and Jay, and they understand that this world is a better place without her,” the obituary closes.

Hundreds of people have taken to the Facebook page of the Redwood Falls Gazette to declare their disgust at the paper for having published the obituary. One Facebook user, Aimee Elizabeth, posted that the paper’s staff should be “absolutely ashamed” for allowing it to get to print.

In screenshots shared online, the Falls Gazette account appeared to reply to Elizabeth, saying that most staff, including the editor, protested the move, but were ultimately overruled. The alleged post has since been deleted.

A relative of Kathleen’s called Dwight Dehmlow hit out at Jay and Gina, claiming there is more to the story than is revealed in the obituary. “It’s not simple,” he told the Minnesota Star Tribune. “She made a mistake 60 years ago, but who hasn’t? Has she regretted it over the years? Yes.”

Dwight appeared to lay the blame for the obituary with Jay. “He’s very upset,” he said. “He decide to go out with hate. I can’t believe he did this. This is going to hurt a lot of people.”