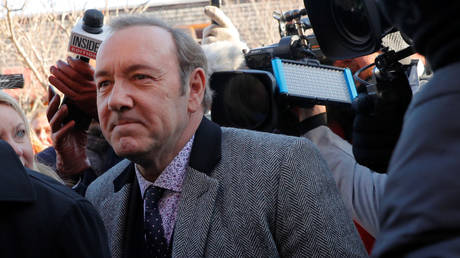 Kevin Spacey’s lawyers entered a plea of not guilty on the actor’s behalf at a Massachusetts court in connection with the high-profile allegations that he groped an 18-year-old at a bar in 2016.

The 59-year-old is facing charges of felony indecent assault and battery over the alleged incident involving a busboy at ‘The Club Car’ bar on Nantucket island two years ago.


The judge ordered the disgraced star to stay away from the young man who accused him, and his family. He also granted a request by Spacey’s lawyers to preserve six months worth of data from the victim’s cell phone which they say contains evidence that is “likely exculpatory” for the actor.

Another hearing was set for March 4 which Spacey does not have to attend, but must be available by phone. If convicted, Spacey faces up to five years in prison.

The allegations were made in November 2017 when a former Boston TV anchor, Heather Unruh, held a press conference and accused the actor of sexually assaulting her son, then 18, in the crowded bar after the teen’s shift finished in July 2016.

The complaint alleges Spacey bought the teen alcoholic drinks and groped him both in and outside of his pants for about three minutes – part of which was allegedly filmed by the busboy on Snapchat and sent to his girlfriend. The 18-year-old left the bar when Spacey went to the bathroom.

READ MORE: Netflix says no House of Cards if Spacey stays, producers may kill his character

This is the first criminal case to be brought against Spacey, whose career was derailed by a litany of sexual abuse allegations when the #MeToo movement erupted in 2017. His first accuser, actor Anthony Rapp, claimed Spacey climbed on top of him on a bed when Rapp was 14 and Spacey 26. Spacey said he did not remember the encounter, but apologised if the allegations were true.

After the charge was announced last month Spacey posted a ‘House of Cards’ like video in the voice of his character Frank Underwood in which he said: “I’m certainly not going to pay the price for the thing I didn’t do.” It’s unclear whether he was referring to the charge in question.