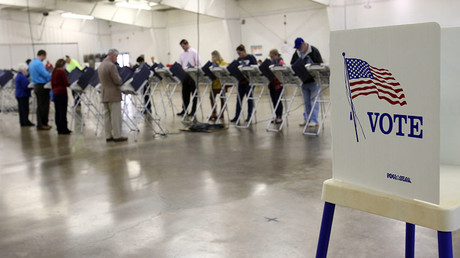 President Donald Trump himself is getting involved in a special election in Kansas, as Republicans face an unexpectedly strong challenge for the House of Representatives seat vacated by Mike Pompeo when he became director of the CIA.

“I’ve heard people whose opinions I respect tell me they think it would be single digits,” Clay Barker, the executive director of the Kansas Republican Party, told the paper.

Senator Ted Cruz (R-Texas) stumped for Estes in Wichita on Monday, while Vice-President Mike Pence and even Trump himself recorded calls to Republican voters in the district, urging them to turn out and vote.

Ron Estes is running TODAY for Congress in the Great State of Kansas. A wonderful guy, I need his help on Healthcare & Tax Cuts (Reform).

“Ron Estes needs your vote, and needs it badly,” the president says in the message. “This is an important election. There’s really few very much more important. And I need your vote for Ron Estes on Tuesday.”

Some Republicans are blaming the “no energy” way Estes campaigned, while others are critical of the TV ad showing him standing in a swamp and asking voters to help him drain it, according to the Star. The ad echoed Trump’s campaign promise to change the government in Washington.

Democrats have used the imagery against Estes, depicting the two-term state treasurer as a career politician and “swamp creature” of Republican Governor Sam Brownback, shown in their counter-ad as an alligator.

Thompson is leveraging his past as a US Army veteran who went homeless as a child and became a civil rights attorney.

“I think that really excites people to have someone who has fought on behalf of the rights of the disenfranchised and abused,” says Djuan Wash, a Black Lives Matter activist and the campaign’s director of African-American outreach.

“It’s definitely competitive. You can look at the early vote numbers. We’re neck and neck,” Thompson’s campaign manager Colin Curtis told the Star. “You don’t sound the alarm if you think you’re safe,” he added, referring to the robocalls by Trump and Pence and the appearance by Cruz.

As of Monday morning, Republicans led the early vote by less than 3,000, with about 3,400 ballots from unaffiliated voters that could tip the balance either way.

The GOP will face another test next Tuesday in Georgia, where Democratic challenger Jon Ossoff has raised more than $8 million in a bid to win the 6th District seat previously held by Tom Price, now Trump’s secretary of health and human services.

Democrats would need to pick up 24 seats to get a majority in the House of Representatives.