State Representative Steve Alford (R-Kansas) has admitted he “was wrong” when he said African-Americans are more susceptible to using marijuana because of their “character makeup” and “genetics.”

“I was wrong, I regret my comments and I sincerely apologize to anyone whom I have hurt,” Alford said Monday, according to the Topeka Capital-Journal.

The firestorm that led to the retraction was ignited by Alford’s remarks at a town hall meeting in Garden City on Saturday.

While commenting against marijuana use, Alford had cited the historic record for why so many drugs, including cannabis, were outlawed in the US in the ‘30’s. Bizarrely, he acknowledged the racist roots of drug prohibition that many advocates of legalization have brought to light in recent years. However, his logic flowed in the opposite direction. Instead of seeing drug prohibition as a means to achieving racist ends, Alford took away that the minority races, blacks in particular, had been reacting to the drugs in a worse way than whites.

“One of the reasons why, I hate to say it, was that the African-Americans, they were basically users and they basically responded the worst off to those drugs just because of their character makeup, their genetics and that,” Alford said. 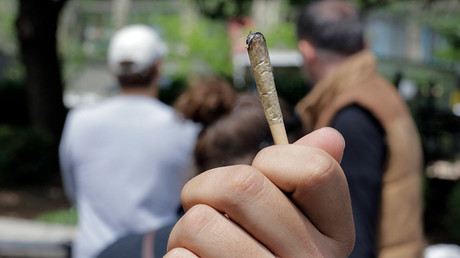 Many of Alford’s colleagues in the legislature were “taken aback” at the lawmaker’s remarks and promised to review the event, the Topeka-Journal reported.

“I think that is outrageous,” Democratic State Senator Oletha Faust-Goudeau said, the Topeka-Journal reported. “For a sitting state representative to say that, I just can’t believe it. You can’t put everybody into one category. He should be more of a statesman and get facts.”

Former Wichita Mayor Carl Brewer, who is seeking nomination for governor in the Democratic Party, said in a statement that the type of ignorance shown in Alford’s statements has existed in Topeka for too long.

“It is hard to believe that in 2018, anyone would support the discredited and racist policies of the Jim Crow era,” Brewer said, the Topka-Journal reported. “No matter one’s feelings on medical marijuana and marijuana legalization, we can all agree that views like those of Kansas Rep. Alford have no place in our Statehouse, in our state, or in our country.”

Alford is the chair of the state’s Child Welfare System Task Force and the House Committee on Children and Seniors. Ryckman could strip the lawmaker of those titles if he chooses to do so. Ryckman stated that he and House Majority Leader Don Hineman, also a Republican, would review the issue and relevant policies with staff, according to the Topeka-Journal.

READ MORE: Dems to Sessions: ‘You can pry legal pot from our warm, interesting to look at hands’

Alford’s controversial anti-marijuana comments come on the heels of US Attorney General Jeff Sessions and the US Justice Department’s decision to rescind the 2013 Cole memo, a rule set in motion by former President Obama’s administration, which enacted a relatively passive policy of federal enforcement of cannabis laws in states that voted to make the drug legal for recreational use.

Harsh reactions came from local and state government officials in California and other states, who say they are surprised, concerned and disappointed by the attorney general’s decision, which could open the door to the federal government intervening in states that legally sell marijuana to adults for recreational purposes.

Lieutenant Governor Gavin Newsom (D-California) took to Twitter after the decision and pointed out that Sessions’ move to rescind the order would have a negative impact both economically and socially.

My full statement on Attorney General Jeff Sessions’ harmful and destructive attempt to revive the failed war on drugs.

Calling on our federal leaders to move quickly to protect states’ rights from the harmful effects of this ideological temper tantrum by Sessions. pic.twitter.com/96xtRx6OYE

California recently became the eighth state, along with the District of Columbia, to approve the recreational sales of marijuana after voters in the states and district approved the measure in 2016.