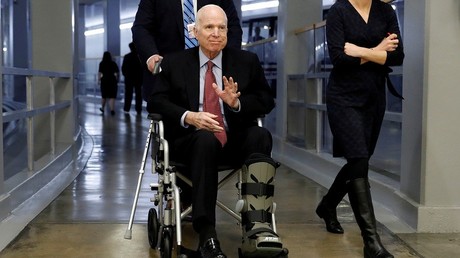 Since he announced the news of the cancer to the American public, “John has surpassed expectations for his survival,” the senator’s family said on Friday.

McCain, who is just days shy of his 82nd birthday, left Washington in December 2017 and has not been back since. He chose not to resign from the Senate and have the governor of Arizona appoint a replacement.

The 2019 National Defense Authorization Act (NDAA) was named in his honor, as chair of the Senate Armed Services Committee.

My family is deeply appreciative of all the love and generosity you have shown us during this past year. Thank you for all your continued support and prayers. We could not have made it this far without you – you’ve given us strength to carry on. pic.twitter.com/KuAQSASoa7

McCain’s most famous vote after the cancer announcement was the July 28, 2017 “No” to repealing the Affordable Care Act, also known as Obamacare.