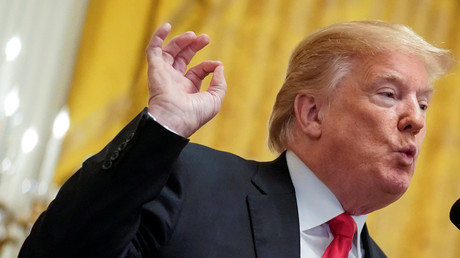 A primetime MSNBC news host just revealed the secret to high ratings in modern America to a chat livestream: Poke fun at the president until he attacks.

TV news is just a show, and nobody knows this better than Lawrence O’Donnell, news anchor, pundit and also the producer and writer of NBC’s political drama ‘The West Wing’.

On Monday, O’Donnell told Cheddar, an online live streaming channel, that he wishes President Trump would publicly attack him. Because, in his own words: “It’s very, very good for business if the president attacks you.”

O’Donnell, MSNBC’s second-highest rated host behind Rachel Maddow, also told the livestream that he believes President Trump focuses his attacks on CNN instead, as CNN has lower ratings and, he claims, “pay people to defend Trump” on air.

But when it comes to chasing those all-important ratings, MSNBC has a trick up its sleeve.

O’Donnell’s fellow host, Rachel Maddow, often deploys crocodile tears in her quest for ratings, most recently ‘struggling’ to get through a report on the Trump administration’s isolation and detention of illegal immigrant children.

And to those in the news business, ratings often come before truth. Last year, conservative watchdog group Project Veritas filmed an undercover interview with CNN producer John Bonifield. On camera, Bonifield admitted that the ‘Trump colluded with Russia’ narrative was “mostly bulls**t,” with “no real proof.”

However, Bonifield noted that the “bulls**t” story is “good for business,” and said that, thanks to Trump, “our ratings are incredible right now.”