Lee Camp delves into 50 shades of darkness as he explains why Obama and Trump’s Supreme Court picks vote shockingly similarly and why the Pentagon didn’t actually believe in the triumph of democracy in Syria.

President Donald Trump’s nomination of Judge Brett Kavanaugh was met with strong opposition from the Democrats, even without the controversial story of sex assault allegations that shocked the nation. Yet, his legal record isn’t so different from former-President Barack Obama’s 2016 pick, Merrick Garland. In fact, as Redacted Tonight host Lee Camp found out, it’s almost identical. 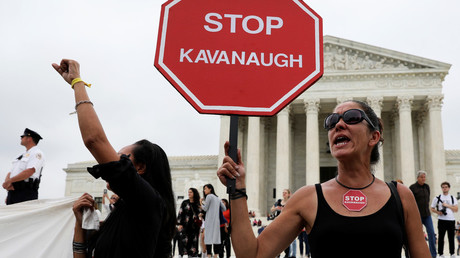 The two judges sat together on the DC Circuit Court of Appeals, and when it came to voting on cases, agreed 93 percent of the time. Furthermore, Garland joined 27 of the 28 opinions authored by Kavanaugh.

And Kavanaugh did the same with 28 of the 30 opinions written by Garland.

This issue was actually brought up publicly during Kavanaugh’s confirmation hearing, but went virtually unnoticed by the mainstream media.

“They want us to believe it’s ‘dark versus light’ or ‘Darth Vader versus Luke Skywalker,’” Camp remarked, saying it would be better to describe the situation as “dark versus a slightly lighter shade of darkness.”

The judges’ striking similarities might not be that surprising, the Redacted Tonight host concluded.

“The real reason Obama’s pick and Trump’s pick are 93 percent identical is because our presidency and our court system have been captured by the corporate state.”

The same corporate interests are driving the new US-Mexico trade deal, which seems more like a repackaged NAFTA as it upholds some of its key features – like giving corporations leeway to pollute the environment, Camp said.

In his show, Camp also explored why the US isn’t too enthusiastic about the prospects of bringing democracy to post-war Syria. Documents obtained by WikiLeaks indicate that the Pentagon never really believed Bashar Assad would be successfully toppled. And even if it happened, the Syrian leader would likely be replaced by “another” strongman from the same regime.