People wishing to own a statue of a naked President Donald Trump will have one final chance to get their hands on the full package, as the last such item is about to go under the hammer.

The statue is the last remaining piece created by the West Coast artist collective INDECLINE. Titled ‘The Emperor Has No Balls,’ the statues were first erected in New York, San Francisco, and other US cities shortly before Trump was elected president in 2016. They were swiftly removed by local authorities. 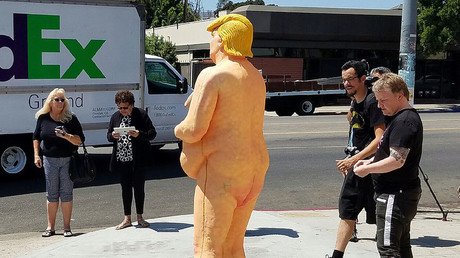 The statues were crafted using clay and silicone, and portray Trump with a pot belly, a drooping bottom, varicose veins, and a tiny penis with no testicles.

If this sounds like the ideal centerpiece to adorn your living room, you’d better be prepared to flash… the cash. Julien’s Auctions estimates that the statue will sell for between $20,000 and $30,000.

The auction will take place on May 2 in Jersey City, New Jersey.