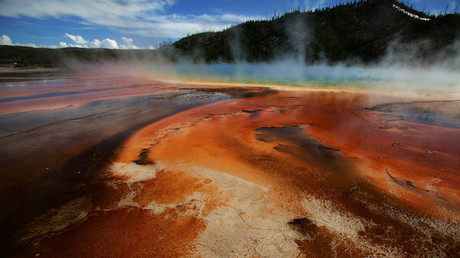 New research proposes that the movement of ancient plates of rock is what powers Yellowstone Park’s supervolcano – the one that could devastate life on earth and blanket cities hundreds of miles away in dense suffocating ash.

Sitting in America’s vast Yellowstone National Park is a dormant volcano so powerful that its eruption would drastically shape the future of humanity. The Yellowstone Caldera –classified as a ‘supervolcano’– has erupted only three times over the last two billion years or so.

Experts say that, if it were to erupt again, a nuclear winter would ensue, with volcanic ash blocking out the sun and the devastation rendering two thirds of the United States uninhabitable.

The current scientific consensus is that a massive plume of magma, rising from deep within the earth, powers the Yellowstone Caldera. The fact that Yellowstone sits in the middle of the North American tectonic plate – away from any fault lines – gives this theory credence.

However, recent research by Virginia Tech geoscientist Ying Zhou suggests that tectonic activity – layers of rock scraping off one another – causes the intense heat below Yellowstone.

Using an imaging process known as diffraction tomography, Zhou was able to map out subterranean activity that looked like the movement of an ancient slab of buried oceanic crust, called the Farallon Plate. This plate began to move when the earth’s continents split apart 175 million years ago, burying itself beneath the North American plate, and causing magma to rise at Yellowstone.

Zhou’s research is not conclusive, however, and she says that more detailed images and computer simulations will be needed to develop her theory.

In the meantime, scientists continue to monitor Yellowstone for changes. The supervolcano last erupted approximately 640,000 years ago, but a study from Bristol scientists last year predicted that catastrophic eruptions happen worldwide every 5.2-48 thousand years, most likely every 17,000 years.

Whether from Yellowstone or another supervolcano, the scientists’ predictions would appear to place the world as overdue for an eruption. However, they cautioned that “the absence of super-eruptions in the last 20,000 years does not imply that one is overdue. Nature is not that regular.”

However remote the possibility of an eruption, park authorities tend to treat any seismic changes around Yellowstone with extreme caution. Last week areas of Grand Teton National Park – connected to Yellowstone – were closed to the public after a 100-foot fissure opened up in a rock face.

It is unlikely that the crack signals an impending eruption but it could split further, causing rockslides and endangering the crowds of tourists who flock to the area during the summer.