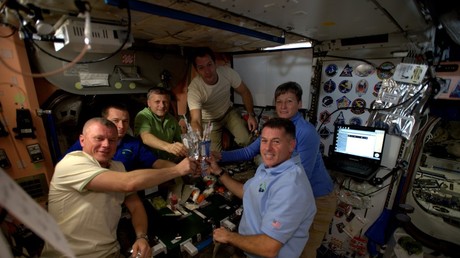 Astronauts aboard the International Space Station are preparing for Thanksgiving in outer space – complete with all the traditional trappings, including the centerpiece of the holiday feast – a turkey. But how do you prepare a turkey in space?

The ISS crew shared a brief explainer video demonstrating how to ‘cook’ Thanksgiving dinner hundreds of kilometers above the Earth. The end result may not look quite as appetizing as the homemade version, but it certainly appears less time consuming.

The video shows an astronaut take a turkey tetrazzini, comprising diced poultry and pasta in sauce, out of its packaging and place it in a rehydration station, before filling it with hot water.

The meal is then placed in a case-like container to keep it warm while it rehydrates. When the process is complete, all that needs to be done is to cut open the packet and dig into the meat.

NASA insists Turkey Day on board the ISS is better than it sounds (and maybe looks), and are so convinced of the tastiness of their holiday spread that they’ve even shared a recipe for their special ‘space’ cornbread dressing.

Thanksgiving lovers will be glad to hear that “no freeze drying is required” when testing the recipe on Earth.

Astronauts have been celebrating Thanksgiving in space since 1973 when Skylab crew members Gerald Carr, William Pogue and Edward Gibson became the first to feast on a turkey dinner with a full dining room and table on board.

Since 2007 the holiday meals have been prepared at the Space Food Research Facility at Texas A&M in College Station before being blasted off our planet to its consumers. Recent menus have included irradiated smoked turkey slices, freeze-dried cornbread, thermostabilized candied yams, mashed potatoes, cranberry pie and apricot cobbler.