Israel announced a major pipeline project from the gas fields off its shore involving four countries, terminating in northern Italy.  The EastMed Pipeline could be one of the longest in history as well as one of the most technically difficult to pull off. 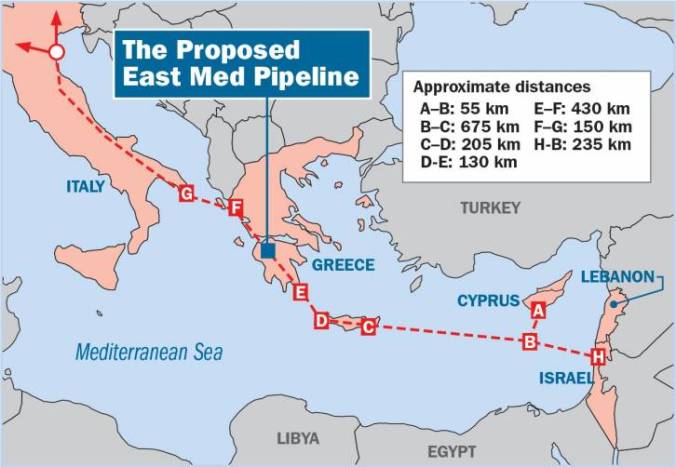 The deal was announced on World Israel News a few days ago and has been in negotiation for a couple of years now.

It’s being billed as a counter to both Arab and Russian power but that’s not really true.  This will supposedly deliver 20 bcm annually to Cyprus, Greece and Italy and come at a significant cost because of the challenge of it.  But the first train will be 10 bcm according to IGI Poseiden’s website, the company building the pipeline.  10 bcm is similar in size to the Southern Gas Corridor bringing gas in from Azerbaijan.

The agreement has been some two years in the works, with the four countries’ energy czars signing a memorandum of understanding regarding the pipeline in December 2017. It is considered a technically difficult project to complete not only because of the depth of the undersea route, but also because it will have to pass through a volcanic area in the ocean bottom between Cyprus and Greece.

No discussion of cost was in the announcement.

It was all about the politics.  But, the politics of this is Kabuki theatre.  The Russians don’t care about more pipelines to Italy, now that Turkstream is ongoing and Europe’s gas needs are accelerating.

This is a European Union project developed by IGI Poseidon under the auspice of the EU’s Connecting Europe Facility program.  The EU is footing a lot of the bill for this.

For all the talk about Russia’s monopoly on the European…