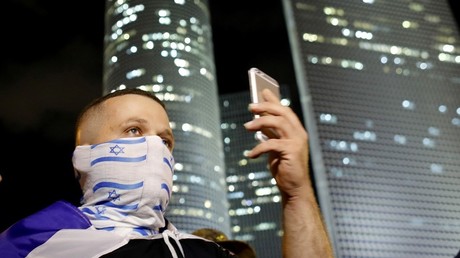 The Israeli consulate in Boston has sent angry messages to a RT America reporter, after his criticism of how the US media were covering the deadly events in Gaza was retweeted by Palestinian activists.

Dan Cohen was pointing out how the Associated Press was “whitewashing Israel’s crimes” including the shooting of the agency’s own journalist in Gaza on Monday, when he received the messages from the consulate, calling him a “disgrace to Americans and Jews everywhere.”

Apparently, the messages were triggered by a couple of tweets by Cohen that were retweeted by Ali Abunimah, the co-founder of Electronic Intifada, a Chicago-based news site reporting from the Palestinian perspective. One of them referenced a documentary Cohen co-produced, called ‘Killing Gaza,’ about the 2014 conflict in the enclave.

If you have received any private messages from any Israeli government office harassing you because I (or anyone else) retweeted you, I’d appreciate it if you could let me know. Let’s expose this harassment and bullying by the thuggish and unhinged apartheid regime.

After Cohen posted the messages from the Israeli consulate on Twitter, Abunimah called for others who have received such harassment to get in touch with him, denouncing it as “bullying by the thuggish and unhinged apartheid regime.”

Last week, the Israeli consulate in New York engaged in a Twitter back-and-forth with journalist Ben Norton, after he commented on the New York Times’ editing of its Gaza coverage to make it more pro-Israel.

READ MORE: ‘Get it right!’ Israeli consulate spars with US journalist over Gaza headlines

Norton was told to “get it right” and accused of getting his news from the “terrorist propaganda TV station of a genocidal terrorist group like Hamas.”