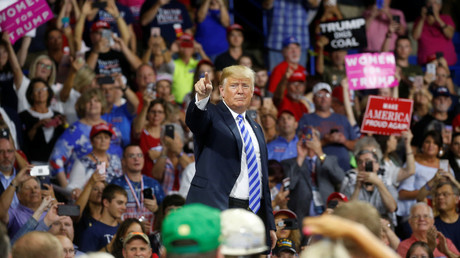 After sparking fury by moving the US embassy in Israel to Jerusalem, President Donald Trump has now dangled a carrot in front of Palestinians by promising that they “will get something very good” in future negotiations.

“It’s their turn next,” was Trump’s reasoning for signalling that his administration is going to throw Palestinians a bone.

Speaking at a rally in Charleston, West Virginia, on Tuesday night, the president defended his decision to move the embassy to Jerusalem, telling supporters that Israel will pay “a higher price” in future peace talks.

“If there’s ever going to be peace with the Palestinians, then this was a good thing to have done,” Trump said of the embassy move, according to The Times of Israel. “We took it off the table. In past negotiations, they never got past Jerusalem. Now Israel will have to pay a higher price, because it’s off the table.”

Trump has long cited the principle of ‘quid pro quo’ in future peace talks, telling Israeli Prime Minister Benjamin Netanyahu at the World Economic Forum in January that Israel “won one point” with the recognition of Jerusalem as the capital but said they will have to “give up some other points later on in the negotiation – if it ever takes place.”

But considering US unwavering support of Israel, it’s understandable how Palestinians would be sceptical of US promises.

Trump announced his intention to move the US embassy to Jerusalem last December, a move which defied the international consensus and contradicted the official US policy of remaining an independent arbiter in the dispute. The UN General Assembly would later pass a motion condemning the decision by a measure of 128 to nine, with 35 abstentions.

The embassy opened in May, sparking mass demonstrations in which around 60 Palestinian protesters were killed and more than 2,000 were injured by Israeli forces.