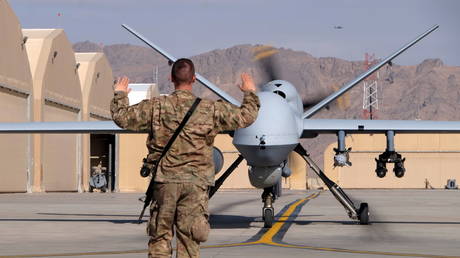 A New York National Guardsman attempting to woo a woman by claiming his “dangerous” job as a CIA agent had placed them both in terrorists’ crosshairs has been arrested for impersonating a public servant.

Staff Sgt. Ryan Houghtalen reportedly told his lady love that “ISIS was after him and because she knew him, that her life might be in danger too,” convincing the woman that she really was in peril, according to New York state police spokesman Trooper Jack Keller.

Hoping to start a relationship with the woman, whom he had met at church, Houghtalen whipped out his fake CIA badge and told her she was “the target of a terrorist organization and that her life was in danger,” warning her that “if she did not follow his directions, she would be seriously injured or killed,” the police complaint against him states.


Heady stuff for a first date, but Houghtalen, who according to Syracuse.com is a sensor operator for the MQ-9 reaper drone of the New York Air National Guard’s 174th Attack Wing in real life, must have hoped the whole ‘international man of mystery’ aura would sweep her off her feet.

Yet instead of staying at home, not talking to anyone, and not calling the police, like Houghtalen told her to do, she “became nervous and upset” and… called the police.

Also on rt.com
US Air Force fires commander of 69th bomb squad for ‘penis drawings’ inside B-52 cockpit


Houghtalen was arrested Monday for second-degree criminal impersonation of a public servant, a misdemeanor. An order of protection was issued, keeping the star-crossed lovers apart for the foreseeable future.