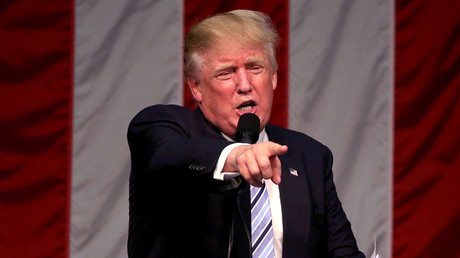 Republican presidential candidate Donald Trump is announcing his foreign policy vision in a speech in Youngstown, Ohio, accusing the Obama administration and Hillary Clinton of aiding the rise of ISIS.

“Mr. Trump will outline his vision for defeating radical Islamic terrorism, and explain how the policies of Obama-Clinton are responsible for the rise of ISIS and the spread of barbarism that has taken the lives of so many,” his senior policy adviser Stephen Miller told reporters in a preview of the speech.

“Trump’s speech will explain that while we can’t choose our friends, we must always recognize our enemies,” Miller added.

Introducing Trump, former mayor of New York Rudy Giuliani accused the Clinton Foundation of being a “racketeering-influenced corrupt organization,” adding that Hillary Clinton “destroyed more emails that I have ever written.”

Trump began listing the most prominent terrorist attacks over the past several years, claimed by Islamic State (IS, formerly ISIS/ISIL), from Ft. Hood to Nice, identifying the enemy as “radical Islamic terrorism.”

“We cannot let this evil continue,” the GOP presidential candidate said. “Nor can we let the hateful ideology of radical Islam… be allowed to reside, or spread, within our own countries.”

It was Clinton who prevailed upon Obama to intervene in Libya in 2011, Trump pointed out.

“Our current strategy of nation-building and regime change is a proven, absolute failure,” Trump said, bringing up his opposition to the 2003 invasion of Iraq.

“All of the reasons for the war were blatantly wrong. All of this, the death and the destruction, for nothing.”

Promising a “swift and decisive end” to nation-building, Trump vowed a new approach “to halt the spread of radical Islam,” adding, “Any country that shares this goal will be our ally.”

The US should work with Russia in fighting ISIS, Trump said, adding “Wouldn’t that be a good thing?”

To combat the “breeding ground” of terrorism, “a new immigration policy is needed,” Trump declared, pointing out that immigrants and children of immigrants account for most terror suspects in the US.

“We will be tough, even extreme,” on immigration, Trump said, announcing a new ideology screening test for immigrants to the US.
To put this policy in place, the US would have to “temporarily suspend” immigration from volatile regions of the world, known for exporting terrorism, he said.

“Hillary Clinton wants to be America’s Angela Merkel,” Trump said, to which someone from the audience shouted back, “No thank you!”

His administration would establish a “commission on radical Islam, to include moderates from the Muslim community,” that would explain Americans what radical Islam is and how to fight it, Trump said.

He also pledged to reopen the Guantanamo detention camp, try foreign combatants before military tribunals, and focus on human intelligence to identify targets for drone attacks.