Prime Minister Theresa May has apparently refused to confirm or deny whether she could give UKIP’s Nigel Farage a peerage, which would allow him to serve in the Cabinet and potentially become a go-between with US President-elect Donald Trump.

Asked at Prime Minister’s Questions whether there had been “any official conversations at any level” on whether to make the interim UKIP leader part of the House of Lords, May said: “All I can say is… that such matters are normally never discussed in public.”

A peerage would bring Farage into Parliament – which he has consistently failed to be elected to – meaning he could serve in government, according to the Independent.

After PMQs May’s spokesperson said she had simply been making a “point about process” which dictates that future peerages are not discussed.

Farage, who stepped down as leader of Euroskeptic UKIP after the EU referendum result, was the first high-profile British politician to meet with Trump following the election. He has said his “good connections” with Trump put him in a prime position to strengthen US-UK relations. 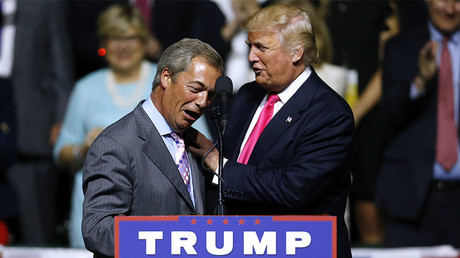 However, Farage, who left the Conservatives in 1992 over then Prime Minister John Major’s pro-European stance, has hinted that if May would not speak to him “informally” about Trump, rejoining the party might be the only way to get his insights across.

When asked by Sky News whether he would defect, he said: “Let’s see what happens.”

“I do have connections with Trump, more particularly with Trump’s team, many of whom I have known for years, and yet the government don’t want in any way to talk to me informally or do anything.”

When asked about a possible merger between UKIP and the Tories, he said: “I don’t see that being on the cards at all.”

Farage also hinted he would join the Tories to hold the party to account over Brexit, saying: “I’m not totally convinced that [the government] is actually going to deliver [on Brexit]. I mean, let’s see what happens. I wish May well as prime minister, I really, genuinely do.”

“My slight concern is that she was home secretary for six years, made a series of big promises and even bigger speeches about immigration numbers, and yet presided over almost record numbers coming to the country, so we’ll have to wait to see what happens.”