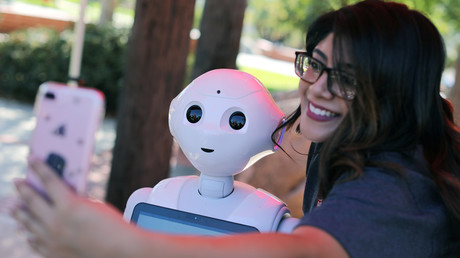 Public schools have joined the ever-growing list of US institutions enlisting robots to pick up the slack – sometimes literally – of human employees, with machines filling such jobs as cleaning, serving, retail and policing.

Public schools in Moore, Oklahoma, made the temporary robotic addition to their cleaning staff last week to spray a chlorine mist following high absence rates due to illness in the district. The robots were on loan from the Norman Regional Health System, which is also lending the robots to schools in Norman and Noble districts as part of an outreach program.

The hospital also added the germ-killing robots, which create a 14-foot-wide “bubble” of ultraviolet C light that kills germs on any exposed surface, to their Porter Avenue and Tecumseh Road campuses in 2016, as part of an overall initiative to reduce infections.

Of course, the bionic buck doesn’t stop there. Amazon opened their first staffless supermarket in Seattle in December 2016, with future plans to extend the checkout-free supermarkets overseas.

Many associate the introduction of robot workers with factories and car manufacturers, but even one of the county’s most reliable companies for minimum-wage employment – McDonald’s – has also enlisted some high-tech help.

Last year, the fast-food chain was made faster by reducing labor costs when they rolled out a digital ordering kiosks in 2,500 of their 14,000 restaurants across the county. They plan on having every branch using the system by 2020.

Even the policing sector is not safe from robotic intrusion. More than 200 robots were transferred from the military to police forces around the country in the first half of 2016. It was more than any other year on record and it doesn’t account for the number of police robots they acquired straight from manufacturers.

With the threatening introduction of self-driving cars and the daily evolution of technology, robots are expected to take 40 percent of US jobs within the next 15 years. That is to say, it’s not “job-stealing foreigners” Americans need to be worried about.