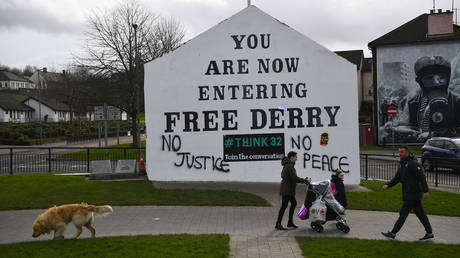 The murder of journalist Lyra McKee and a spate of recent incidents of violence attributed to the ‘New IRA’, have sparked fresh worries about social unrest in Northern Ireland — but how great is the threat, and is Brexit to blame?

The dissident republican group calling itself the ‘New IRA’ has admitted responsibility for the killing of McKee last week during riots with police forces in the border city of Derry. The group was also blamed for a car bomb attack outside a Derry courthouse in January and six nights of rioting in the city last summer, the worst violence the region had seen in years.

Many have suggested that Brexit tensions are to blame for the recent uptick in violence, but that reasoning is “too simplistic,” Irish journalist Danielle Ryan said. While Brexit has acted as somewhat of a “catalyst” for the recent unrest, “the tense political and social situation in the north far precedes Brexit — and the history is much too complicated to boil this new wave of violence down to any one factor,” she said.

Also on rt.com
Woman shot dead in Northern Ireland was journalist who covered violence there for years


Political and sectarian divisions are simmering just beneath the surface in NI; a place where nationalists (typically Catholic) vote for nationalist parties, and unionists (typically Protestant) vote for unionist parties. In that vein, when it came to the Brexit vote in 2016, nationalists mostly voted to remain in the European Union, while unionists mostly voted to leave. Overall, a majority in NI voted to remain, and that added “one more layer of division into an already deeply divided society,” Ryan said.

But what is potentially having a greater impact than Brexit is the collapse, two years ago, of the Northern Ireland Assembly at Stormont — the powersharing institution created by the Good Friday Agreement (GFA), which was signed in 1998 and brought a relative peace and end to 30 years of conflict known as the Troubles.

Northern Ireland currently has “no functioning political system,”and “if there is a vacuum, something will fill it,” journalist and political activist Eamon McCann told RT. The collapse of the political institutions has “created an anger” among people — and rioting tends to happen in working class, Catholic/nationalist areas, where many young people are facing a tough economic situation and feel their future prospects are dismal, McCann explained.

“They believe they are being treated badly by society, by the police, by officialdom, by bureaucracy, so they are alienated from society, so to speak,”he said.

It is in that context that a group like the New IRA can recruit.

Having said that, McCann is careful to add that support for the New IRA among the nationalist/Catholic community is extremely low and there was widespread revulsion at McKee’s death. The New IRA is also “much, much smaller”in comparison to the Provisional IRA that was active during the period of the Troubles.


It’s important to remember, however, political analyst and journalist John Wight told RT, that the six counties in Northern Ireland were “colonized by Britain” and that the Provisional IRA emerged because Northern Ireland in the 1960s and 70s was a “sectarian, apartheid, mini-state” where the Catholic community was denied basic rights.

“The Provisional IRA was a child of British colonial and sectarian oppression,” he said.

Another more recent factor adding to tensions in the last couple of years is British Prime Minister Theresa May’s “outrageous and despicable” decision to “wade into Northern Irish politics by violating the neutrality that is enshrined in the GFA,” Wight said.

May has used the right-wing Democratic Unionist Party (DUP) to prop up her government in the House of Commons, since unexpectedly losing her majority in the 2017 general election. This is in contravention of the GFA, which requires that London remain neutral when it comes to politics in NI — something which Wight said all other British governments had observed and respected as crucial for maintaining peace.

British politicians who favor the hardest possible Brexit are “risking the peace” in Northern Ireland, Wight argued, adding it would be wrong to look at Britain as just some “some benign country that is shackled” to the EU. “Britain is the most regressive nation within the EU,” he said, one with a history of “empire, colonialism and support for US hegemony” around the world.


The other question on many minds as Northern Ireland tensions rise is whether the possibility of a united Ireland is on the table.

“That is always an option, and if Britain leaves the EU in a no-deal scenario, there is a serious case to be made that such an event should trigger a unity referendum,”Ryan said. Under the terms of the GFA, both north and south must vote in favor of unification.

Whether there will be more violence in the coming months depends in part on how Brexit plays out going forward, security analyst and former UK counter-terrorism intelligence officer Charles Shoebridge said. A Brexit without a customs agreement “could increase levels of violence” if that meant the presence of customs officers and security personnel at the border, a possibility which border communities are deeply worried by.

Also on rt.com
United Ireland? It may not be as far off as you think


But McCann insisted that Northern Ireland was “not going to go back to the days when there were mass riots and shootings day after day. That’s not going to happen anymore, at least that’s my judgement, for the simple reason that there’s no support for it.”

McCann suggested that the revulsion at McKee’s death might even lead to a “lessening of violence”in the long term, since it showed up how little support there is among the nationalist communities for a return to darker days.

While there may not be support for a return to violence, Ryan said that the possibility is always hanging over the region; “whether that is violence by dissident republican and loyalist paramilitaries, or extremist actions by police which spark more anger in disaffected communities, the threat is unfortunately still there,” she said.