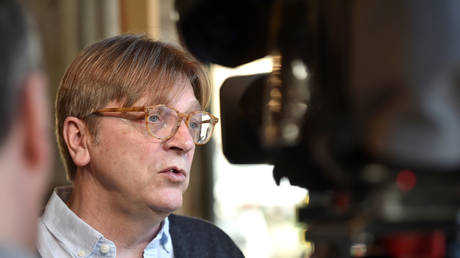 The European Parliament’s Brexit co-ordinator Guy Verhofstadt has insisted that the Irish border backstop must remain part of the UK’s withdrawal deal from the European Union.

The European Parliament’s Brexit group has, once again, confirmed that it will not approve any new divorce agreement between Britain and the EU that does not contain a “backstop” provision.

The comments come after the British Parliament backed the ‘Brady amendment’ to Prime Minister Theresa May’s withdrawal deal on Tuesday. The amendment seeks to remove the backstop from the agreement.

The Brexit Steering Group, led by Verhofstadt, has reiterated its position on the largely intractable issue of the border between Northern Ireland and the Republic of Ireland.

“…The withdrawal agreement is fair and cannot be re-negotiated,” the group said in a statement Wednesday.

“This applies especially to the backstop … without such an ‘all-weather’ backstop-insurance, the European Parliament will not give its consent to the withdrawal agreement.”

Wednesday’s statement echoes comments made by European Council President Donald Tusk who insisted that the divorce deal was not up for renegotiation and that unspecified “alternative arrangements” would not be entertained.


“The Withdrawal Agreement is and remains the best and only way to ensure an orderly withdrawal of the United Kingdom from the European Union,” Tusk said Tuesday via his spokesman.

The backstop issue focuses on maintaining an open border on the island of Ireland when the UK leaves the EU. It has been strongly opposed by Brexiteers in Theresa May’s Conservative Party and the Democratic Unionist Party (DUP), who argue that it would mean that the UK could end up in a customs union with the EU indefinitely.