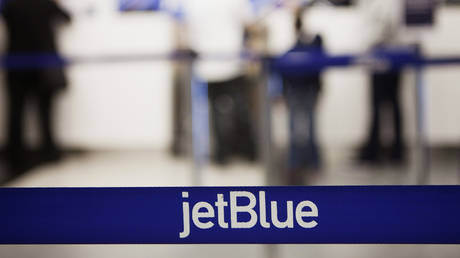 An unnamed female passenger has become the latest viral airline passenger for all the wrong reasons after mounting the check-in counter and calling a staff member a rapist before claiming to be armed and homeless.

The woman’s JetBlue flight scheduled to leave Fort Lauderdale-Hollywood International Airport on Sunday was reportedly delayed due to a computer fault, however, the company disputes this version of events.

She then dismounted the desk before loudly declaring that she had a gun in her possession. The woman was arrested shortly after by officers with the Broward County Sheriff’s Office.

“The customer in the viral video was scheduled on a flight which did not experience any major delays,” a JetBlue spokesperson told Yahoo.


The woman was apparently denied boarding as she was intoxicated, according to the airline.

“On January 6, crew members at Fort Lauderdale-Hollywood International Airport requested assistance from local law enforcement after a customer was denied boarding for indications of intoxication and became disruptive,” a spokesperson from JetBlue Corporate Communications said.

JetBlue has experienced repeated, high-profile and often viral incidents in the past few years.