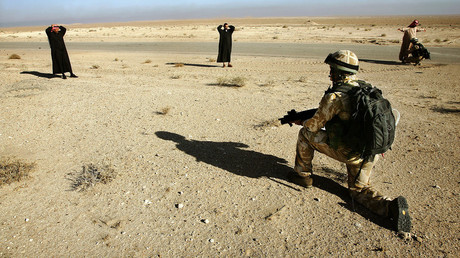 An Iraqi man who is suing the Ministry of Defence (MoD) for alleged abuse and false imprisonment during the Iraq war claims he was beaten by British troops, the high court has heard.

Abd Ali Hameed Ali al-Waheed said in his testimony on Monday that he was physically mistreated and unlawfully detained by the British army during 2007 in a ‘test case,’ which could pave the way for hundreds of similar compensation claims.

Waheed told the court on the first day of a five-week hearing that he was “truly terrified” when British troops reportedly stormed into his house in the southwestern Iraqi city of Basra as he slept.

“I was thrown face down,” he said, according to the Guardian. “At that moment we were terrified.” Waheed added that he was then repeatedly kicked by soldiers and hit with the butt of their weapons before they “put goggles on my eyes as well as earmuffs and something heavy on my head, I think it was a helmet.”

Richard Hermer QC, who is representing the claimant, said Waheed was further beaten at the place of his detention after being mistaken for a bomb maker. His brother-in-law was the actual target of a series of raids under the codename “Operation Saddlers.”

Troops found an improvised explosive device in his house, however, initial witness statements by the soldiers contradicted whether Waheed was in the same room as the bomb.

The military reportedly subjected Waheed to “tactical questioning” at a processing facility at Basra Airport where the alleged abuse took place following his arrest.

Hermer cited an army medic’s examination, which was dated a day after Waheed’s arrest and mentioned “extensive bruising over his upper back and arms,” which indicated he had been beaten.

Waheed was also held without charge for more than six weeks, two of which included solitary confinement. That was despite interrogators concluding he was innocent after he fully cooperated with British authorities and tried to provide information that could be useful to his captors.

He is one of two former detainees suing the MoD for alleged abuse, the other being Kamil Najim Alseran.

Since his detention, Waheed has suffered from lower back pain, depression and post-traumatic stress disorder, the court heard.

Representing the MoD, barrister Derek Sweeting QC said Waheed’s witness statements had persistently changed over time and that he continuously provided different accounts of what happened.

The supreme court dismissed hundreds of claims against the government by Iraqis last month because they were brought forward too late. The 600 cases were time-barred under article 232 of the Iraqi civil code, The Guardian reports.