The US should stay in the Iran nuclear deal, as Tehran has been found to be “compliant” with the agreement, Pentagon chief James Mattis said. President Donald Trump has repeatedly threatened to scrap what he has called the “worst deal ever negotiated.”

“I believe that they [Iran] fundamentally are [in compliance]. There have been certainly some areas where they were not temporarily in that regard, but overall our intelligence community believes that they have been compliant and the IAEA [International Atomic Energy Agency] also says so,” Mattis said during a House of Representatives hearing Tuesday. 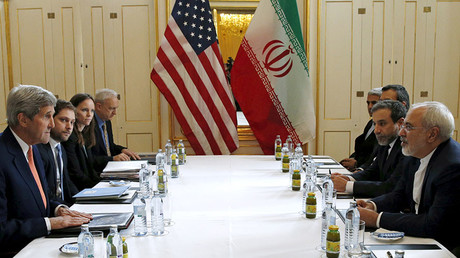 “The point I would make is that if we can confirm that Iran is living by the agreement, if we can determine that this is in our best interest, then clearly we should stay with it,” Mattis told the Senate Armed Services Committee. “I believe at this point in time, absent indications to the contrary, it is something that the president should consider staying with.”

Iran is “not in a material breach of the agreement,” said General Joseph Dunford, chairman of the Joint Chiefs of Staff. “I believe that [the agreement] has delayed Iran’s nuclear program.”

Under the deal negotiated in July 2015, Iran agreed to reduce the number of its uranium enrichment centrifuges by two-thirds, cap its enrichment below the level needed for weapons-grade material, reduce its enriched uranium stockpile by 98 percent from around 10,000kg for 15 years, and allow international inspections.

In exchange, much of the international sanctions against Tehran have been lifted. Some US sanctions, however, still remain in effect.

On the campaign trail, Trump vowed to destroy the deal negotiated by the Obama administration, calling it “disastrous” while speaking before the American-Israeli lobby in Washington, DC.

In February, he formally put Iran on notice for firing a ballistic missile, once again calling the deal “terrible.”

Iran has been formally PUT ON NOTICE for firing a ballistic missile.Should have been thankful for the terrible deal the U.S. made with them!

Senior US officials have repeatedly accused Iran of violating the “spirit” of the nuclear deal by testing ballistic missiles. Tehran says its missile program is entirely unrelated.

Iranian President Hassan Rouhani warned in September that Washington would pay a “high cost” if it pulled out of the nuclear deal. Quitting the agreement would “yield no results for the US, but at the same time it will generally decrease and cut away and chip away at international trust” placed in Washington, the Iranian political leader said. Iran’s supreme leader, Ayatollah Ali Khamenei, has also said that Tehran would not tolerate US attempts to undermine the deal.

President Trump’s stance on the deal has also been of concern for the EU, with the bloc’s foreign policy chief Federica Mogherini having pointed out the achievement in striking the long-negotiated agreement belongs to the international community and not just the US.

“It is a commitment undertaken by the entire international community on one side and Iran on the other, supported by a resolution of the UN Security Council,” Mogherini has said, calling the deal “a good and robust agreement that serves the interests of all parties.”

In February, the International Atomic Energy Agency (IAEA) said Tehran had been found in full compliance with the nuclear deal. The watchdog’s report put Iran’s low-enriched uranium stockpile at only half of the permitted amount.

In September, the UN watchdog monitoring Iran’s nuclear activities once again confirmed that the country is fully in compliance with its agreement with world powers. Tehran is not pursuing construction of its existing heavy water research reactor and has not enriched uranium above the agreed 3.67-percent limit, the report concluded.