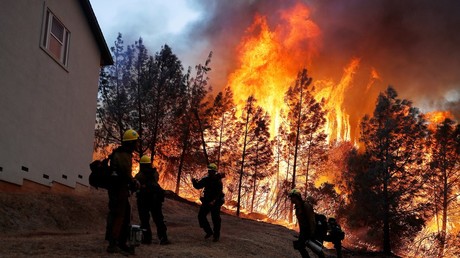 A fast-moving wildfire is rapidly spreading through northeastern California, growing to over 16,000 acres in under 12 hours and leading acting Governor Gavin Newsom to declare a state of emergency.

What has been dubbed Camp Fire began early Thursday near the town of Pulga and moved west, consuming 8,000 acres by 1 pm, according to the California Department of Forestry and Fire Protection. By Thursday afternoon, the fire was growing at the rate of about one football field every three seconds, assisted by dry conditions and wind gusts of up to 65 mph.

As of Thursday afternoon, two firefighters and multiple civilians had been injured, while a significant number of structures were consumed, according to Butte County CalFire Chief Darren Read.

Approximately 200 civilians were reported to be trapped by the fire that had grown to over 16,000 acres by 4pm.

Over 30,000 residents of Paradise, Butte Creek, and Magalia were ordered to evacuate, as were local hospitals, schools, and a retirement home. The fire was zero percent contained as of 1pm Thursday afternoon, according to Cal Fire, and is visible from satellites.