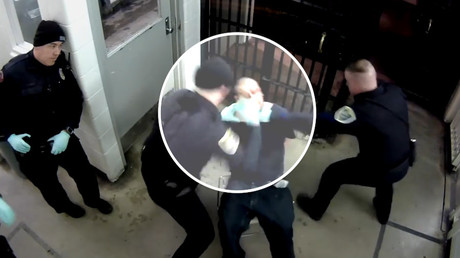 The mayor of Elkhart, Indiana has admitted that “in hindsight” the officers who were caught on CCTV beating a handcuffed suspect should have been given a harsher punishment by the police chief.

Earlier this year, a man was arrested by Elkhart police for felony domestic battery in front of a child as well as battery on a police officer, public intoxication, disorderly conduct, and resisting law enforcement.

CCTV footage from the police station shows the suspect spitting at officer Cory Newland before he and another cop, Joshua Titus, repeatedly punch the handcuffed man in front of two other officers – including the mayor’s son. The man was subsequently wheeled out of the station on a stretcher.

Speaking about the January 12, 2018 incident, Mayor Tim Neese told ProPublica that on reflection, Police Chief Ed Windbigler should have been tougher on the cops involved.

The mayor also admitted the case was only sent to the prosecutor’s office in October after a reporter for the South Bend Tribune asked for a copy of footage of the incident.

Upon investigation, the police administration found the officers used excessive force against the handcuffed suspect, and turned the inquiry over to the Elkhart County Prosecutor’s Office for further review on October 26.

On Friday, the prosecutor’s office said the two cops would be charged with criminal battery, a class A misdemeanor. They have both been placed on administrative leave pending the outcome of the investigation.