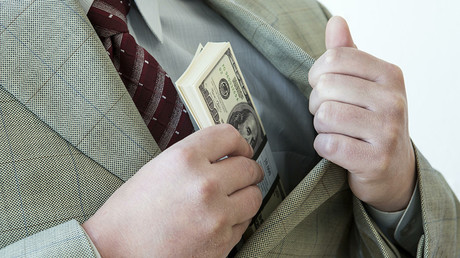 Though it has one of the highest per-capita incomes in the US, Connecticut is facing a budget shortfall, and the Democratic governor is coming to terms with the fact that raising taxes on the rich for the third time in six years may not be enough.

Located in New England, between New York and Massachusetts, Connecticut has one of the highest per-capita incomes in the country, right behind the District of Columbia, according to the Bureau of Economic Analysis. The state is home to hundreds of hedge funds, Yale University, and companies such as United Technologies and health insurance giant Aetna.

Yet the state is facing a $400 million shortfall in income tax collections this fiscal year, for the first time since the 2008 recession. About half of that drop comes from the state’s top 100 earners, who account for much of Connecticut’s tax revenue.

#connecticut: every road is under repair, taxes are hi, no one moving in, many moving out. We’re Flint MI without the water problem.

Governor Dannel Malloy, who tried to solve the state’s budget problems in 2011 and 2015 by raising taxes on the rich, now says it would be a mistake to do it a third time, according to the Wall Street Journal.

“You can’t go back to that well again,” Kevin Sullivan, commissioner of Connecticut’s Department of Revenue Services, told the paper. “The idea that there is yet another significant amount, in terms of long-term stability, to get out of that portion of the population is just not true.”

After both previous tax hikes, the average liability for the state’s 100 wealthiest residents would rise the first year, and then fall again, the department of revenue said. Furthermore, the Trump administration’s proposed tax reform includes repealing a state tax deduction, making it more difficult for states to raise taxes on the wealthiest residents, according to the Journal.

Since it was introduced in 1991, the state income tax grew by 9 percent annually until the 2008 financial crisis. Malloy’s tax hikes brought the top tax rate up to 7 percent. Yet the state is now projecting a $5.1 billion budget deficit over the next two years, while needing to service debt and pay healthcare and pension costs. Connecticut’s budget crisis has compelled all three major ratings firms to downgrade the state’s credit.

The state cannot hope to make up the shortfall by taxing new residents, either, since more taxpayers have been leaving Connecticut than moving to the state since 2010, according to the Internal Revenue Service. General Electric, which had been headquartered in Fairfield since 1974, announced the move to Boston, Massachusetts in January 2016.

Governor Malloy has asked for $700 million in concessions from public sector unions, and wants to cut another $700 million in state funding to cities and towns. However, the unions maintain that the state should continue taxing the rich.

State lawmakers should consider “asking Connecticut’s wealthiest taxpayers and largest corporations to sacrifice and pay a little more to protect the services that people rely on,” Larry Dorman, a spokesman for Council 4, the state’s largest public-sector union, told the Journal.