US Secretary of State Mike Pompeo called up his Russian counterpart Sergey Lavrov and discussed better relations with Russia and the conflicts in Syria and Ukraine, the State Department said.

In the first call to Lavrov that Pompeo has made since he took over as the US top diplomat in April, the two discussed “issues and concerns related to the bilateral relationship, Ukraine, and Syria,” State Department spokeswoman Heather Nauert said on Wednesday.

“Secretary Pompeo reiterated that though the United States seeks an improved relationship with Russia,” Nauert noted in her readout, adding that “achieving that will require Russia to demonstrate that it is prepared to take concrete actions to address our concerns, including interfering in US domestic matters.”

According to the Russian Foreign Ministry readout, the two diplomats agreed on the need to work on “overcoming existing differences through professional dialogue in the interests of normalising the atmosphere of Russian-US interaction.”

They made no mention of alleged Russian interference in US domestic affairs. 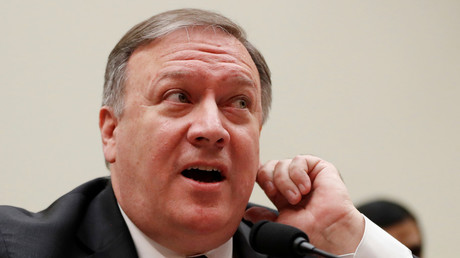 Pompeo, who headed the CIA for a year before taking over at Foggy Bottom, is known as a hardliner on Russia in the Trump administration. At his Senate confirmation hearings in April, Pompeo described Russia as “a danger to our country” and blamed Russian President Vladimir Putin for any “bad blood” between Washington and Moscow. He also said the previous administration’s “soft policy” enabled Russian “aggression.”

Last week, testifying before the House Foreign Relations committee, Pompeo described the Trump administration as “light years” ahead on Russia from its predecessor. As examples, he brought up the US push to stop the construction of Nord Stream 2 pipeline and efforts to “keep the Turks in a place where they will never acquire the S-400,” a Russian-made air defense system.

Turkey is a NATO ally that has fallen out with Washington in recent years, in particular over Syria and Israel.

Once complete, Nord Stream 2 would increase the reliable supply of Russian natural gas to Germany and the rest of Western Europe. Existing pipelines run through Poland and Ukraine, both of which have US-backed governments hostile to Russia. Ukraine has interrupted the flow of Russian gas multiple times in the past.

Though North Korea was not explicitly mentioned in either readout, there is a good chance that Lavrov and Pompeo may have discussed the upcoming summit between US President Donald Trump and North Korean leader Kim Jong-un. Lavrov is expected in Pyongyang on Thursday.