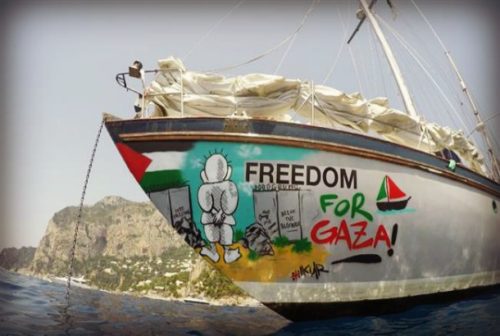 Events from 29 July when the Israeli Navy stormed the Freedom Flotilla al-Awda hijacked and diverted it from its intended course to Gaza to Israel.

The last leg of the journey of al-Awda (the boat of return) was scheduled to reach Gaza on 29 July 2018. We were on target to reach Gaza that evening. There are 22 on board including crew with US $15,000 of antibiotics and bandages for Gaza. At 12.31 pm we received a missed call from a number beginning with +81… Mikkel was steering the boat at that time. The phone rang again with the message that we were trespassing into Israeli waters. Mikkel replied that we were in International waters and had right of innocent passage according to maritime laws. The accusation of trespassing was repeated again and again with Mikkel repeating the message that we were sailing in international waters. This carried on for about half an hour, while Awda was 42 nautical miles from the coast of Gaza.

Prior to the beginning of this last leg, we had spent two days learning non-violent actions and had prepared ourselves in anticipation of an Israeli invasion of our boat. Vulnerable individuals, especially those with medical conditions, were to sit at the rear of the top deck with their hands on the deck table. The leader of this group was Gerd, a 75 year old elite Norwegian athlete and she had the help of Lucia a Spanish nurse in her group.