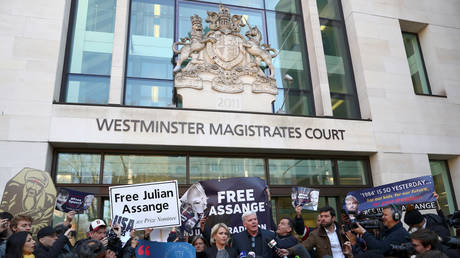 The UK judge who found Julian Assange guilty of breaking his bail conditions in 2012 has called the whistleblower a “narcissist” and his behavior “shameful.”

Inside the courtroom, District Judge Michael Snow branded the WikiLeaks founder a “narcissist who cannot get beyond his own selfish interest.”

Just hours after his arrest by British police on Thursday morning, Assange was found guilty of failing to surrender to bail in 2012. Assange pleaded not guilty to the charge, with his lawyers arguing that he would never have received a fair trial if he had been extradited to Sweden on sexual assault charges and that he was therefore forced to seek asylum at the Ecuadorian embassy.


The sexual assault charges were later dropped, but UK authorities still sought to arrest Assange for breaching the bail conditions.

Responding to the surprising comments, US political commentator Daniel McAdams wrote sarcastically on Twitter that he “sounds like an impartial judge.”

Assange is set to be sentenced in regard to the bail-breaking on May 2.

The controversial publisher was also indicted by the US on charges of conspiracy to commit computer intrusion, the US Department of Justice said on Thursday. He is accused of helping fellow whistleblower former US Army soldier Chelsea Manning attempt to crack the password of a Department of Defense computer in 2010.

Experts and analysts, however, have slammed the US indictment as “weak” and a possible “tactic” to get Assange onto US soil where heavier charges likely await and where a fair trial will be almost “impossible.”