A viral video showing the imam of an Islamic center in Virginia advocating female genital mutilation to prevent “hypersexuality” in girls has sparked condemnation from the mosque. Members are calling for the imam’s dismissal.

Shaker Elsayed, the imam of Dar Al-Hijrah Islamic Center in Falls Church, Virginia, gave a lecture on child rearing and family life in May, describing female genital mutilation (FGM) as the “honorable thing to do” for young girls, because it prevents “hyper-sexuality.”

“You see in societies where circumcision of girls is completely prohibited, hyper-sexuality takes over the entire society, and a woman is not satisfied with one person, or two, or three,” Elsayed said.

The video of the lecture, which was posted on the Islamic center’s YouTube page, quickly went viral and was later removed from the page after many called for Elsayed’s dismissal.

@monaeltahawy update: the mosque board has denounced him & called for his resignation, but he refuses to step down. Keep the pressure on!

On Monday, the Board of Directors at Dar al-Hijrah issued a statement denouncing Elsayed’s views on FGM, which they said are “prohibited in Islam as well as the laws of the land.”

“We at Dar Al-Hijrah, DO NOT condone, promote, or support any practice of FGM,” the board said in a statement. “The reference to ‘Hyper-sexuality’ is offensive and it is unequivocally rejected. The Board of Directors is particularly disturbed by such comments.”

The board also called on Muslim scholars to join the fight against FGM and “condemn silence in the face of these harmful practices.”

The statement also included a retraction from Elsayed, who apologized for his statements on “hyper-sexuality.”

“FGM is very harmful to women’s health, and anything in Islam that is harmful is in fact prohibited,” Elsayed said in a statement. “I admit that I should have avoided it. I hereby take it back. And I do apologize to all those who are offended by it.” 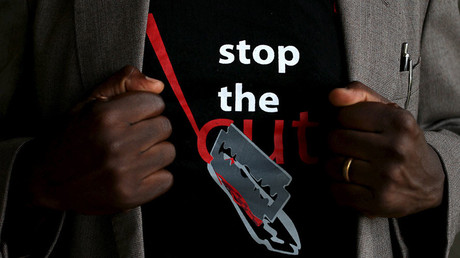 In his lecture, Elsayed described the process, where a gynecologist cuts “only the tip of the sexual sensitive part in the girl so that she is not hyper sexually active.” He warned his listeners about unqualified gynecologists who “cut more than needed.”

“They end up damaging the sexual sensuality of the woman, when she becomes an adult, and she becomes cool or cold in the sexual relationship. And this is haram. This is prohibited,” Elsayed said.

In his apology, Elsayed reiterated that he warned about the potential harms and told his listeners that they should talk to their obstetrician-gynecologist (OBGYN) about the procedure.

The World Health Organization (WHO) has branded the practice as a human rights violation and says it offers “no health benefits, and it harms girls and women in many ways.”

The organization says FGM can cause “severe bleeding and problems urinating, and later cysts, infections, as well as complications in childbirth and increased risk of newborn deaths.” The list of consequences from the procedure include painful urination, menstrual problems, human immunodeficiency virus (HIV) and even death.

WHO estimates that more than 200 million women alive today have undergone the procedure.

Dar Al-Hijrah has been labeled “the 9/11 mosque” by critics. Nidal Malik Hasan, the shooter at Fort Hood in 2009, attended the mosque in 2001 at the same time 9/11 hijackers Nawaf al-Hazmi and Hani Hanjour were regulars when Anwar al-Awlaki – who later joined Al-Qaeda – was an imam there, according to the Associated Press.

The mosque’s phone number was also found in the Hamburg, Germany, apartment of Ramzi bin al-Shibh, a planner of the 9/11 attacks, according to the congressional joint-inquiry into the 9/11 attacks.

Anwar al-Awlaki, a former imam at the Virginia mosque, left the country after the 9/11 attacks to become an Al-Qaeda leader.