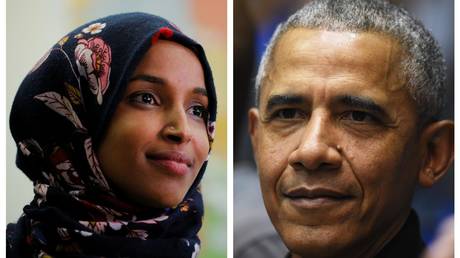 Ilhan Omar has tried to walk back her scathing criticism of former president Barack Obama by tweeting a clip of her actual response to the reporter and accusing him of distorting her words, only to prove that he got it right.

Calling herself “an Obama fan,” Omar claimed she was contrasting the former US leader with President Donald Trump, claiming the reporter had “distorted” her words deliberately.

The only problem? The clip she tweeted confirms the reporter got her words right. We hear Omar saying Democratic leaders have “conducted themselves within the system” in shameful ways – separating families at the border and drone-bombing countries around the world, just like Trump. She says Trump’s policies are bad but that “many of the people who came before him also had really bad policies, they just were more polished than he was.”

Also on rt.com
Obama was a smiling murderer, says Ilhan Omar… then tries to backtrack


And the line that has everybody talking is there, crystal clear: “We don’t want anybody to get away with murder because they are polished. We want to recognize the actual policies that are behind the pretty face and the smile,” Omar says.

Exhibit A of how politicians use the media as a straw man to avoid owning what they said.

Your tape…supports what I wrote 100%. So does my longer tape. It’s beyond dispute.

Next time, a phone call from your office before the Twitter ambush would be appreciated. https://t.co/eb2grgn5Cd

Many were surprised to hear the freshman congresswoman call out the first black president, who, despite policies largely indistinguishable from his predecessor George W. Bush, has enjoyed high approval ratings, thanks in part to his smooth speech and immaculate presentation. But just as many cheered Omar for her continued willingness to speak truth to power, and were confused by her willingness to eat her words.

I agree with her, having heard the tapes, and am mystified that it is seen as controversial.
But then, I try to be honest, where politicians try to say nothing using button words that make the listener hear what they want to hear.

These are totally fair criticisms of Obama though. Why so gun shy?

Others took pleasure in watching her squirm.

She can’t play the “I don’t want everyone to be comfortable, exciting things happen when people are extremely uncomfortable” card … then say something uncomfortable … and be like “stop twisting my words, I didn’t mean that uncomfortable thing!”

Or insisted there was something missing.

Great, put up the longer tape! I imagine you followed up asking for more clarity, and I’m curious to hear what you got.

I did hear what you had written. However would the longer tape be useful to post?

Others stuck up for Omar and accused Alberta of taking her words out of context anyway.

Distorting context and meaning to sensationalize may not make your quotes inaccurate, but says a lot about your ethics.

Interesting to see a journalist whining about being “ambushed” for this kind of work. You’ve got some nerve asking others for undeserved courtesy.