Following the Parkland, Florida school shooting, the media focused on new gun control laws, while ignoring the failures of law enforcement and the government program encouraging schools and police to look the other way.

The Valentine’s Day shooting at the Marjory Stoneman Douglas High School in Broward County, Florida left 17 students and faculty dead and 14 more wounded. The gunman was identified as Nikolas Cruz, 19, a former student with a history of behavioral problems.

As it unfortunately happens after each shooting in the US, calls for gun control dominated the aftermath of the tragedy at Stoneman Douglas. Several students have since become celebrity gun control advocates, denouncing the National Rifle Association (NRA) and calling for tougher gun control laws, and their emotional outbursts have been amplified by the media such as CNN. 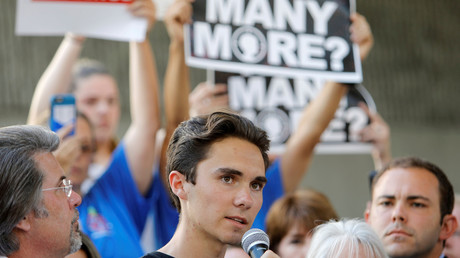 There is absolutely a question of how Cruz was able to legally get his hands on a semi-automatic AR-15 semi-automatic rifle. There are also questions surrounding why the local police and the FBI ignored several warning signs and reports they received about Cruz.

A new investigative report by conservative journalist Paul Sperry points to one possible reason why the school district and the Broward County Sheriff’s Office might have looked the other way: a 2013 program implemented by the Obama administration to end the so-called “school to prison pipeline.”

Broward County Sheriff’s department showed slow reaction to the developments in Parkland on February 14. Sheriff Scott Israel, who joined the students at the CNN town hall in pillorying NRA spokeswoman Dana Loesch, admitted that one of his deputies assigned to the school did not enter the building to engage Cruz, instead choosing to stand outside. The deputy was allowed to retire.

CNN also reported claims from the police in nearby Coral Springs that three more Broward County deputies who arrived at the scene took up positions outside the school, but did not enter or engage. Israel responded by claiming he had given “exemplary leadership” to the sheriff’s department.

The day after the CNN town hall, Israel released the history of service calls to the home of Nikolas Cruz, which were mostly related to domestic violence. Eighteen of the calls involved Cruz himself, but “none appeared arrestable under Florida law,” Israel said.

The last call listed, dated November 30, 2017, came from someone in Massachusetts who said that Cruz was “collecting guns and knives” and “could be a school shooter in the making.”

The FBI was also alerted to Cruz on January 5, over a comment left on a YouTube video under his name. The bureau said that they were unable to verify the identity of the commenter, and that the tip was somehow never forwarded to the Miami office. Florida Governor Rick Scott (R) has called for FBI Director Christopher Wray’s resignation over the failure.

“Broward County adopted a lenient disciplinary policy similar to those adopted by many other districts under pressure from the Obama administration to reduce racial ‘disparities’ in suspensions and expulsions.” https://t.co/O7nrm9eYiA Why are we even talking about the NRA?

The puzzling reluctance of authorities to do anything about the multiple reports concerning Cruz directly contributed to the carnage at Stoneman Douglas. According to Perry this may be due to a program called PROMISE (Preventing Recidivism through Opportunities, Mentoring, Interventions, Supports & Education).

After the December 2012 carnage at the Sandy Hook Elementary School in Newtown, Connecticut, the Obama administration quickly moved to deploy more police in schools, allocating $44 million in grants for the effort. However, the measure was criticized by civil rights groups such as the American Civil Liberties Union (ACLU) and the Justice Policy Institute, which argued that putting school discipline in hands of police would disproportionately target minority students and set them up for a life of crime.

Obama’s Secretary of Education Arne Duncan came up with a solution: create a program that would replace discipline with counseling, and pay the police to stop arresting students for infractions. Broward County implemented the new program, called PROMISE. Though the county had 1,062 school-related arrests in 2011-12, by the 2015-16 school year that number had been reduced by 63 percent, thanks to PROMISE.

“We have to measure the success of the Broward Sheriff’s office by the kids we keep out of jail, not by the kids we put in jail,” Sheriff Israel said at a 2015 event. “We have to give our children second chances and third chances.”

In the February 25 CNN interview, Sheriff Israel continued to defend the program.

“It’s helping many, many people,” he told CNN’s Jake Tapper. “What this program does is not put a person at 14, 15, 16 years old into the criminal justice system.”

“What if he should be in the criminal justice system?” Tapper replied, pointing out the case of Cruz.

The intent of the program was certainly noble: to reduce the numbers of students falling afoul of the law, particularly the minorities, and change the culture from the old policy of “zero tolerance” that would have landed a student in jail for something like drawing a picture of a gun.

What seems to have happened in practice, however, was a situation in which the government was threatening to withhold funds from schools unless they were silent about theft, violence, threats, and even assaults on teachers. In the end, despite the reduction in overall arrests, the percentage of black students arrested was still disproportionately high compared to whites, according to Broward Schools superintendent Robert Runcie.

Between Nikolas Cruz’s yet-unexplained rage, the FBI’s mistakes, Sheriff Israel’s “amazing leadership” and an Obama-era policy that may have had the best of intentions but worked out far differently in practice, 17 lives were cut short and many more were changed forever.

Now that the Media and Leftists have successfully made the Florida shootings all about gun control, let’s not forget who was responsible for the tragedy:

The shooting quickly sank into the swamp of US partisan politics, with Republicans rejecting any talk of gun control and pointing at system failures, and Democrats seeking to campaign on gun control in the upcoming November midterms ‒ with the help of at least one Stoneman Douglas student.