No longer a tropical storm, Hurricane Nate reached Category 1 status before midnight Friday, as it nears landfall in the Southeast US. Four states along the northern Gulf Coast have already declared states of emergency.

The National Hurricane Center (NHC) has issued a hurricane warning on the Gulf Coast from Grand Isle, Louisiana, to the Alabama-Florida border.

According to the NHC, an Air Force Reserve Hurricane Hunter aircraft has “penetrated the center of Nate and reported hurricane-force winds” late Friday night.

“Maximum winds are estimated to be 75 mph (120 km/h) with higher gusts,” the NHC reported.

The National Weather Service (NWS) initially forecasted Tropical Storm Nate would move into the Gulf Coast and strengthen into a Category 1 hurricane on Saturday night.

The center of the storm moved over eastern Honduras on Thursday and has been blamed for at least 22 deaths across Central America so far. The NHC records Nate with sustained winds of 60 miles per hour as it passed near the Yucatan Peninsula on Friday at 9:00pm GMT.

Nate is expected to reach the northern Gulf of Mexico over the weekend.

The storm is expected to bring heavy rainfall of three to six inches along the northern Gulf Coast and into the eastern Tennessee Valley and southern Appalachians through the weekend, resulting in the possibility of flash flooding in those areas.

Bracing for the storm, governors across the Southeast have declared states of emergency. Florida Governor Rick Scott (R) declared a state of emergency in 29 counties, and 7,000 members of the National Guard have been made available for deployment.

Mandatory evacuations have been ordered in New Orleans for residents living outside the levee system.

Governor Phil Bryant (R) declared a Mississippi state of emergency and signed an Executive Order authorizing the use of the National Guard on Friday. 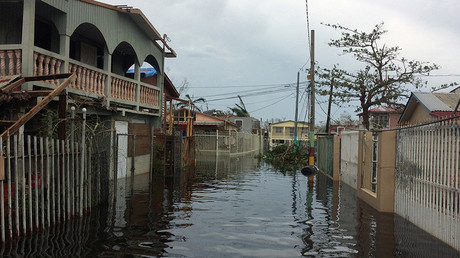 New Orleans Mayor Mitch Landrieu held a press conference Friday, where he announced a mandatory evacuation order for residents living outside the levee system, including the Venetian Isles, Lake Catherine and Irish Bayou. Residents were ordered to evacuate by 12:00pm (local time) on Saturday. The city’s floodgates will be closed after that time.

Landrieu said that a storm surge, potentially in excess of 6-9 feet, “is a primary threat from Nate in areas outside the levees.”

He advised residents to prepare for power outages and encouraged them to have backup supplies.

New Orleans suffered catastrophic losses in 2005 when Hurricane Katrina hit the city in 2005, The storm was responsible for 1,833 deaths and approximately $108 billion in damage, according to the NWS.

The 2017 Atlantic hurricane season runs from June 1 to November 30, as the continental US and its territories have already been severely ravaged by several storms. After Hurricane Maria hit Puerto Rico, the Commonwealth and the Virgin Islands have had fewer FEMA personnel to help them, according to the agency.