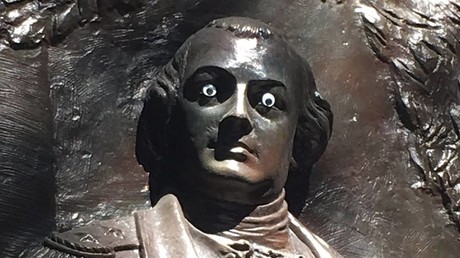 Police in Savannah, Georgia, are looking for a prankster who put googly eyes on the statue of a revolutionary war hero. “It’s no laughing matter,” the city stressed, and was taken seriously by absolutely no-one.

The Savannah city government on Thursday issued a call to public to help it catch the perpetrator, who vandal-eyezed the monument for Nathanael Greene, a major general in George Washington’s Continental Army in the American Revolutionary War.

The statue had its own carved eyes covered with a pair of popping googly eyes. The Savannah Police Department were alerted to the makeover and removed the cartoonish eyes on Thursday. No damage to the statue has been reported.

However, since the monument is fenced off, the joker is now facing trespassing charges. Police said it had been reviewing CCTV footage to determine the culprit.

The incident might have gone unnoticed but for the Savannah government, which posted the image of a googly-eyed Greene on its Facebook page, with the post immediately going viral and reaching national news.

“It may look funny but harming our historic monuments and public property is no laughing matter, in fact, it’s a crime.”

In contrast to the serious tone of the publication, the commentary section has been flooded with non-stop wisecracking, as the majority of the locals apparently took the practical joke rather lightheartedly.

“Whoever posted this, does not understand how the internet works,” another user quipped.

History-savvy commentators suggested that it might be the handiwork of Lord Cornwallis, Greene’s British nemesis, whose troops the American general defeated at the Battle of Guilford Courthouse in March 1781.

Some pointed out that the amount of attention the googly-eyed stunt is getting is unnecessary and will only trigger copycats. Others had to make it about race.

“Turns out that I’m nowhere near white enough to be outraged by this,” Kara Bryant Greathouse wrote.

And some reminded the officials there were actual problems to be worried about next door.

“There’s literally a town that’s completely leveled right now and we are worried about $2 eyeballs that barely stick on a good day?” Ashley Jones wrote.

While eastern Georgia has been spared the brunt of the hurricane Michael, the southwestern part of the state is reeling from the calamity that battered it with gusting winds and even spawned a tornado. An 11-year old girl was killed by a tree that fell on her home in Seminole County.